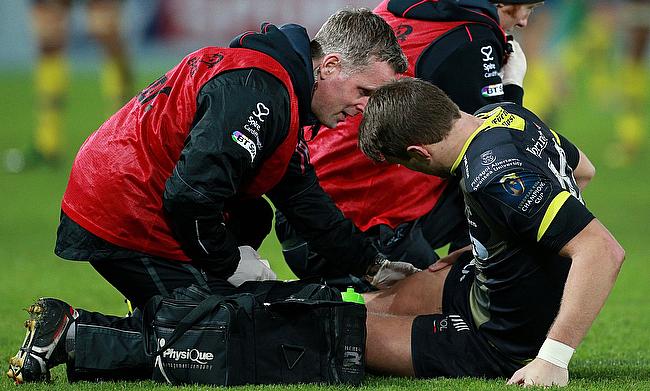 Substitute Sam Davies delivered a commanding performance as the Ospreys fought back superbly to floor French heavyweights Clermont Auvergne in stunning fashion at the Liberty Stadium.

Clermont had led by seven points at half-time, and in a further blow to Ospreys' hopes, they lost their talismatic fly-half Dan Biggar to injury. But his replacement Davies took charge, kicking four penalties and a drop-goal to add to two earlier Biggar penalties.

Ospreys moved top of Pool Two as a result of their 21-13 victory, with Clermont denied even the consolation of a losing bonus point despite centre Wesley Fofana's early try, and eight points from scrum-half Morgan Parra's boot.

It looked as though it would be a frustrating night for the Ospreys, especially when Biggar limped off after 48 minutes.

Biggar, with his right thigh heavily strapped, initially tried to run off the injury, but his recovery attempts proved fruitless and his early exit will undoubtedly prove a concern for national coach Warren Gatland three weeks before the start of this season's RBS 6 Nations Championship.

But nothing could take the gloss off a special night for the Ospreys as they extended a remarkable winning record against French opposition in Europe at the Liberty Stadium to 14 games.

Clermont beat the Ospreys in a Champions Cup thriller two months ago, and both teams started where they left off, looking to attack by spreading the ball to the wide channels.

And such ambition brought an opening try for Clermont after just five minutes, as they went through a string of technically pinpoint phases before fly-half Camille Lopez weaved his way into deep inside the Ospreys 22 and Fofana gathered his try-assisting pass.

Parra added the conversion, and although Biggar got the Ospreys moving with a ninth-minute penalty, Clermont showed no sign of slowing up, with full-back Scott Spedding proving a particularly dangerous attacking threat running the ball back from deep.

A second Biggar penalty cut the deficit to a point, but that was immediately cancelled out by a Parra strike after Ospreys wing Eli Walker needlessly infringed during an aerial challenge on his opposite number, David Strettle.

The Ospreys enjoyed a sustained spell of pressure after falling 10-6 behind, and their cause was helped when Clermont's Georgian international flanker Viktor Kolelishvili was sin-binned by referee Wayne Barnes after he appeared to thrust his arm in Ospreys skipper Alun-Wyn Jones' face.

Another Parra penalty put the visitors seven points clear, having weathered the Ospreys' storm inside their own half, and Clermont's forwards put together a couple of ominous long-range rolling mauls as half-time approached, suggesting that the Ospreys could face a challenging second 40 minutes.

Parra missed a long-range penalty chance early in the second period, but Clermont were then forced into a change as Strettle limped off to be replaced by Albert Vulivuli.

The Ospreys then lost Biggar, but his replacement Davies was to enjoy a 20-minute purple patch, kicking two penalties and a drop-goal as he inched his team two points in front after Clermont's substitute hooker John Ulugia was yellow-carded.

Ospreys moved to within sight of the Clermont line, but the French side looked set to claim an interception try when Lopez intercepted an Ospreys attack and broke clear downfield, but Ulugia had drifted offside and he was sent to the sin-bin for what was adjudged a deliberate offence.

Davies kicked another penalty 10 minutes from time, with Clermont looking a shadow of the side that had dominated during an opening 40 minutes when their forwards were rampant and Lopez controlled matters impressively.

But Davies predictably - and deservedly - had the final say two minutes from time with his fourth penalty that meant the Ospreys scored 15 unanswered second-half points and kept themselves on course for a quarter-final place.