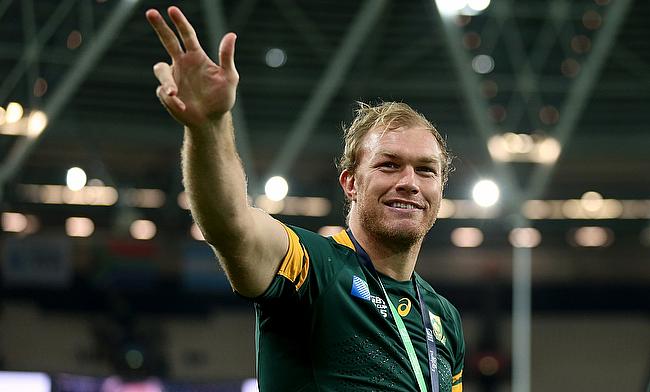 South African international flanker Schalk Burger has agreed to join the reigning Aviva Premiership champions Saracens on a two-year deal from the 2016/17 season.

Burger, capped 86 times for his country and a veteran of four World Cups including the Springbok's victorious 2007 campaign, will arrive at Allianz Park next season upon completion of spells at Japanese club Suntory Sungoliath and Super Rugby province Stormers, between whom he is splitting the current season.

The 32-year-old back row, who played a pivotal role in South Africa's march to the semi-finals at England 2015, was named world player of the year in 2004.

"I'm delighted to be joining Saracens. I'm extremely excited to have the opportunity to play in both the Premiership and European Cup - two of the leading competitions in world rugby - for such a special club," Burger said.

"It's an exciting challenge for me and my family and hopefully I can add a lot of value on and off the field to an already successful group of players and coaches."

Recruiting Burger represents a major coup for the current Premiership table-toppers, who are set to lose two of their premier back row players - Ernst Joubert and Jacques Burger - at the end of the season.

Burger holds the record for the most caps accumulated and most tries scored by a Springbok flanker and can play anywhere across the back row, although his preferred position is at blindside flanker.

Such is Burger's importance to his national side that South Africa built their gameplan around him at last autumn's World Cup, repeatedly using him at first receiver where he would either carry, clear out a ruck or feed the ball to his fly-half or wing.

He has had issues with neck and knee injuries in the past, but his darkest hour came in 2013 when surgery to relieve pressure on a nerve resulted in him contracting bacterial meningitis.

A four-day isolated spell in intensive care led to fears for his life, but Burger made a full recovery and was able to play again by the end of the season.

Director of rugby Mark McCall insists Saracens - who are now the sole unbeaten team in Europe this season - have signed one of the sport's outstanding players.

"Schalk is a Springbok legend and will add a huge amount of experience and quality to our young English forwards," McCall said.

"We have always talked about having the right blend of experience and youth in our squad, so to be able to add one of the world's finest players to the group is extremely exciting news.

"By the beginning of next season we will have lost two highly experienced back row forwards in Ernst Joubert and Jacques Burger, so to have a player of Schalk's calibre coming into the squad is fantastic news.

"He is a man who has achieved everything there is to achieve in the game of rugby. Not only is he a fine rugby player, he is a humble and down to earth guy who we believe we will fit into the Saracens environment."