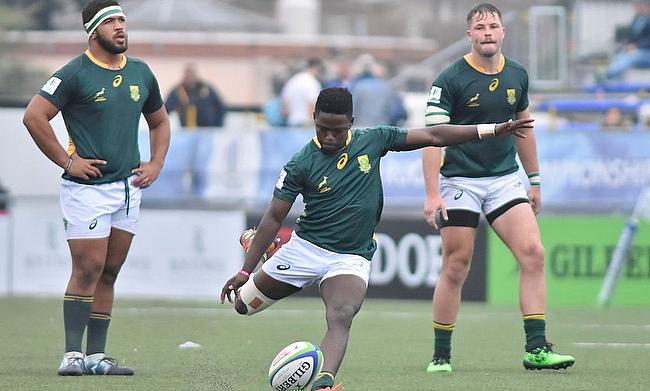 South Africa overcame three sin-bins as they went on to beat New Zealand 25-17 in their World Rugby U20 Championship encounter at Racecourse Stadium to reach the semi-final.

The win means South Africa have reached the top place in Pool C with 14 points and will take on France in the semi-final while New Zealand will compete with Wales in the battle for the fifth place.

An offload from Rikus Pretorius proved pivotal in Vaughen Isaacs crossing over in the 8th minute for the opening try. Scrum-half Jaden Hendrikse missed out on the conversion but kicked a penalty goal few minutes later to make the scoreline 8-0.

Their second try came in the 13th minute when JJ van der Mescht stole a lineout and raced across the line taking the scoreline to 13-0 but their momentum was hampered a bit when Dylan Richardson was sin-binned in the 21st minute for a deliberate knock-on.

New Zealand failed to make use of the numerical advantage but they were presented with another opportunity with Sibusiso Sangweni yellow-carded for a no arm tackle in the 33rd minute. This time Fergus Burke kicked a penalty goal to get New Zealand off the mark.

Just as the half-time was approaching, Hendrikse kicked back to back penalties taking the scoreline 19-3. South Africa had their third sin-bin in the game at the start of the second half with James Mollentze yellow-card for a tackle off the ball and to make things worse, New Zealand were awarded a penalty try to reduce the gap down to nine points.

As the final 10 minutes kicked-off, Sanele Nohamba kicked a penalty goal stretching their lead to 12 points before Lalomilo Lalomilo's try in the 75th minute gave New Zealand hope reducing arrears to five points but they could not find any more breakthrough. Instead, Nohamba kicked another three-pointer to complete a 25-17 win.

South Africa captain Phendulani Buthelezi: “It was massive game for us, and credit to the New Zealand side, they pushed us all the way. I’ll be honest, our discipline let us down today but I’m proud of the way the boys responded and stuck together. We’re going to focus on our recovery now and make sure we hit the ground running in the semi-final.”

New Zealand captain Kianu Kereru-Symes: “The South African boys brought the pressure we knew they were going to bring, but I don’t think we adapted properly until the last few minutes of the first half which meant we didn’t get in the game. In the first half we rushed our plays and that put us under pressure quite a lot. When we took our time, we got some good results out of it but we couldn’t quite execute.”