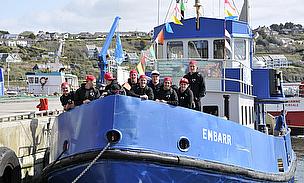 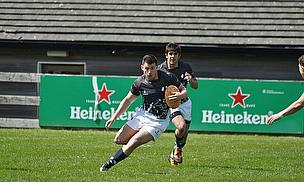 City of Manchester 7's Festival - The Hottest Ticket in Town
Surreal Summer Of Sevens For Strange
Sevens Heaven - So Tell The Men In Blazers!

RedPanda7s is the idea of Max Ashcroft. So why RedPanda?

Well, whilst at Bath Rugby, Max lived with Max Anderson, Max Maidment, Will Skuse and Harry Sanders - with all those Max, nicknames were created. Max Ashcroft was known as Panda, he also is a redhead.

The guys have now gone their different ways with Will Skuse continuing to play at Bath Rugby, Max Maidment finishing his degree at Bath University and joining the Cornish Pirates in the Championship.

Max Anderson and Harry Sanders are still in Bath in their final year at the University and Harry is a regular with RedPanda7s. Max Ashcroft is at Manchester Met University and playing his rugby with Sedgley Park Tigers in National 2.

The first young player to be identified by PPP was Simon Kerrigan, who made his debut for England's Test cricket team in this year’s Ashes. The second was Max Ashcroft, who had just started with the Bath Rugby Academy. The third, Josh Beaumont, son of England Rugby legend Bill Beaumont has just captained England Students Rugby and is playing for Sale Sharks.

PridePassionParty then created a rugby 7s team to compete at the Heineken Kinsale Sevens. The team competed in 2011 and 2012, finishing runners up in 2012.

At the end of 2012, Max Ashcroft took over the management of the sevens team and that was the creation of RedPanda7s. The team is sponsored by Talking Rugby Union and PridePassionParty (a division of Amscan).

The mantra for RedPanda7s is to provide a professional rugby environment for young talented athletes to showcase their abilities and enjoy their experiences.

Two quotes amplify this. The first is from England's discovery of the 6 Nations, Joe Launchbury: "I was playing Division Two rugby not so long ago and I can tell you, there are plenty of good young players that missed the net."

The second from RedPanda7s, Max Ashcroft: "It's not how big you are it's how big you play."

To provide a professional set up, RedPanda7s are always looking for sponsors and partners, please make initial contact with redpandabranded4@gmail.com

The back room staff are led by Director of Rugby, Alex Keay. Alex has a rich international playing career and has coached at the highest level of UK club and University rugby. Alex is pleased to have Matt Keyte (former London Welsh, Bristol and Bath) alongside him as coach.

The squad is a blend of PPP past players, England, Wales, Scotland and Spain age-group players. New and unheralded players are also included and we look forward to them gaining further recognition. Many of the players have competed for Durham and Bath Universities; some have moved on to play in the National Leagues.

For the second year running the team reached the Elite Final at the Heineken Kinsale 7s, losing to Wild Geese of Ireland. At the MR7s a tough draw in the pool stages ensured it was to be a tough day but with wins against Samurai, Irish Exiles and Irish wolfhounds the team were finalists in the plate losing to Worcester Warriors.

The Bournemouth competiton was very high profile for the team and when the group games were announced, RedPanda7s found themselves first game up against the unbeaten and reigning Champions, The Army.

In an incredibly emotional game, the RedPanda team recorded the sevens result of the year with a massive win. Looking like the team to beat after the pool games, RedPanda found themselves facing Templar7s. In what was a nail-biting game, the Templars raced away before the young RedPanda team pegged them back. Templars went on to deservedly win the tournament; with Ryan de la Harpe providing the experience.

The Skofic 7s is a charity event in memory of Jonathan Skofic. In its first year the event brought together clubs Jonathan had been involved with - Hutton Grammar School, University of Bath, Preston Grasshoppers and Tarleton Rugby. The very successful Durham University also accepted the invitation and were the inaugural winners in 2012.

Looking forward we asked Max about the plans for 2014: "We are certainly signed up for Kinsale and the Skofic7s.

"We have also approached the GB7s organisers but have not had any feedback as yet."

Max went on to explain that the focus on talented undergraduates put some limitations on the dates the team could be available, telling us that "exams usually take priority so we have to be careful when we play to avoid conflict."

Talking Rugby Union will continue to be one of Red Panda’s sponsors into 2014 but Max revealed that the RedPanda7s family was being enlarged to support 17s to 19s age groups through RP-007s and a grassroots team - Calavera RP7s.

Finally, we asked Max about his own sevens career. He thought long and hard before replying: “My debut was at the Heineken Kinsale 7s in 2011 for PridePassionParty.

"As a prop, I found it tough and was surprised to be selected for University of Bath in the BUCS 7s of 2011. Since then I have concentrated on playing 15 man rugby and managing Red Panda 7s."