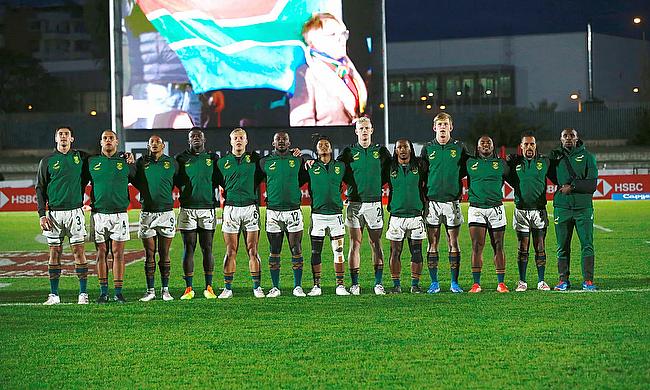 Rodrigo Isgro got Argentina off to a flying start with a try in the opening minute but Davids responded back with a touchdown just before the break and Branco du Preez followed with the conversion to give the Blitzboks a slender 5-7 lead at the end of the opening half.

JC Pretorius helped South Africa get into the lead for the first time with a touchdown but back to back tries from Joaquin de la Vega in the 10th and 11th minutes ensured Argentina had control with a 17-12 lead.

The Blitzboks reduced the deficit when Justin Geduld went over in the corner, but the conversion fell agonizingly short and left the Series leaders two points down with one minute remaining.

Davids burst through the defence to win it, evading a desperate tackle from Marcos Moneta to get over the line and spark joyous celebrations.

“We knew it was going to be tough here. We gave it our all, stuck to our instructions and played as ourselves,” said Davids.

Meanwhile, England went on to win Australia 24-20 to claim the Bronze medal.

Earlier, South Africa blanked Canada and Australia in the quarter-final and semi-final respectively while Argentina went past Ireland and England to reach the final.

USA claimed their first title in the ongoing edition of HSBC Women's World Rugby Sevens Series after they defeated Russia 35-10 in the final while Australia settled for a Bronze model with a 35-10 win over Russia.