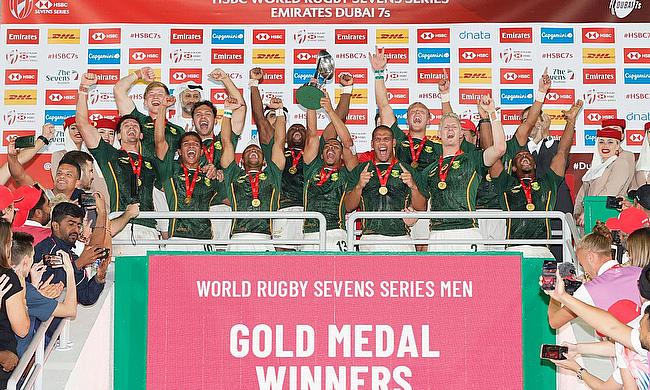 South Africa have completed a double in the Dubai legs of the HSBC Men's World Rugby Series after edging out their Australian counterpart 10-7 in the final.

Siviwe Soyizwapi started the proceedings with an early first minute try but Corey Toole kept Australia in lead before the break with a touchdown in the 5th minute and Dietrich Roache kicked the conversion as the scoreline became 7-5 at the end of the opening half.

Player of the final JC Pretorius scored the decisive try in the 12th minute after a crucial turnover from Billy Meakes which proved enough as they sealed a thrilling three-point victory to clinch the title for the second successive time in this campaign.

“Australia really took us the wire, it was a brilliant match,” Soyizwapi said after the match.

“Credit to my boys though, we battle so hard for each other and showed grit when we had to. It is such a great way to end 2021.”

HSBC player of the final Pretorius said: “We just gel so well as a group and never give up, that is the key.”

Earlier, Australia defeated Ireland 24-12 in the quarter-final and followed it with a 40-0 victory over Argentina to reach the final while South Africa had wins over Kenya and France in the knock out matches.

Argentina went on to win the Bronze final as they finished third after beating France 38-21.

South Africa hold the top place in the overall standings after clinching both the Dubai legs in the tournament with 44 points while Argentina are at second with 34 points followed by Australia, USA and Great Britain.