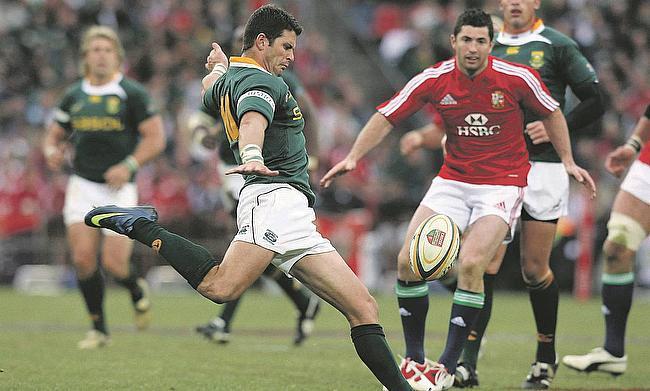 Steyn was selected over Elton Jantjies as a cover for Handre Pollard in the third and deciding Test at Cape Town Stadium on Saturday and came off the bench in the 65th minute. He immediately showed his class with a penalty in the 67th minute and just when the scores were levelled 16-16, the 37-year-old slotted the winning points in the 78th minute to seal a three-point victory.

This was the second time Steyn was involved in a series triumph over Lions as in 2009, his penalty kick in the added minutes helped South Africa to a 28-25 win in the second Test that helped them claim the series.

"I'll be honest, I was sitting with my head between my legs, I didn't see the penalty," Nienaber told reporters. "I'm happy for him in terms of having the opportunity to play again. It's a fairy-tale 12 years on."

"Morne's selection was an hour-long discussion from the coaches between the two players (Steyn and Jantjies). But we felt his experience in this particular environment was the key.

"But hats off to Elton, we have got three unbelievable flyhalves and he could not have been a better during the week in terms of preparing us for (the attacking threat of Lions flyhalf) Finn Russell."

South Africa endured a tough time in the build up to the Lions series as they could not play a single game last year following their World Cup triumph in 2019 due to the pandemic coronavirus restrictions. Even their series against Georgia leading to the Lions series was restricted to just one game after the Springboks players were tested positive for Covid and had to isolate themselves.

Despite, the setback, Nienaber credited the squad and the support staff for the turnaround as they went on to claim the series against the Lions.

"Even the guys who weren't positive had to sit in their hotel rooms for seven days (to isolate)," Nienaber says.

"Rassie (Erasmus) took over to help the guys who weren't positive.

"But we believe there is no time for excuses, you have to move on and make another plan and that is what we did."