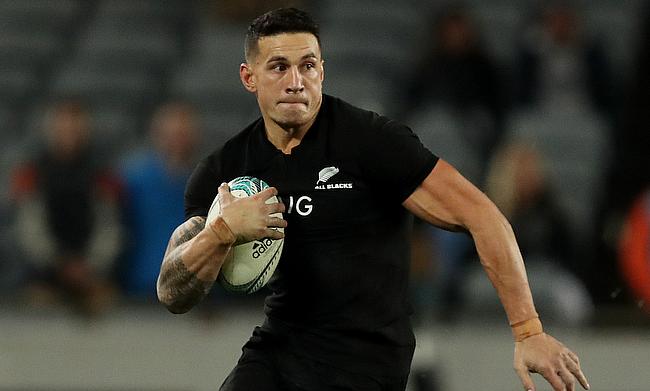 Sonny Bill Williams has been named in the starting line-up of New Zealand for the Rugby Championship opener against Australia in Sydney on Saturday after the completion of his four match ban.

The Auckland Blues centre suspension came after he was handed a red card during the second Test against British and Irish Lions in Wellington and his availability for the opening game of the Bledisloe Cup comes after his successful appeal against the against the details of his four-match ban.

Apart from Williams' inclusion, head coach Steve Hansen has made five other changes from the line-up that played against Lions in the final Test in Auckland that ended in a 15-15 draw.

Damian McKenzie, who has played just two Tests for All Blacks has been named at fullback with Ben Smith moving to wing. Rieko Ioane, who missed the third Test against Lions has been drafted into the XV along with Ryan Crotty following his successful recovery from injury while Jerome Kaino is among the surprise exclusion with Liam Squire being the preferred choice.

"This Test will give us a great opportunity to gauge where we are at when it comes to things we have been working on since the Lions tour," Hansen said.

"We just think that for this game in particular, Damian has been playing really well and it gives us a better-balanced back three, aerially - and Rieko as we know is really strong too.

"It’s the biggest trophy we play for outside of the World Cup and it means a lot to the group — it’s part of who are we, and our legacy is about honouring, respecting and enhancing the jersey.

"We’ve held this trophy for a while, and no one wants to be part of giving it up."