Some Good News for Wales - Roberts Ready for Return 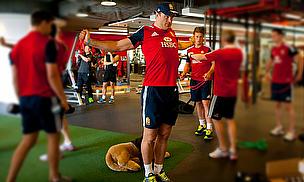 Welsh and British Lions star centre Jamie Roberts, who is currently applying his trade in France, looks set to make his first appearance in over three months when Racing Metro play Harlequins at the Twickenham Stoop on Sunday afternoon.

The 27-year-old sustained a ligament tear in his left ankle in only his third game for the French club following his summer move from Cardiff Blues.

This weekend’s fixture is a return of last week’s game where the French side were crushed 32-8 in Nantes by the visiting English. The victory has blown Pool 4 of the competition wide open, and Racing Metro are in desperate need of a boost.

Paris-based Racing Metro have struggled during Roberts' absence and are eighth in the Top 14 despite a number of high-profile signings, including Dan Lydiate and Jonathan Sexton.

Roberts and Lydiate were recently joined by another Welshman at Racing, with scrum-half Mike Phillips signing following his dismissal by Bayonne.

"I found it very hard," Roberts told the BBC of his spell on the sidelines.

"I was just starting to find my feet on the pitch, beginning to pick up all the calls and so forth, and to get injured at that time was a real blow.

"But as tough as it has been, I have tried to look at it positively.

"Over the past three or four years, I have played a lot of rugby. It's been pretty much non-stop, so the only way to look at my injury was as a rest in disguise.

"But now I'm ready to go again, really looking forward to putting my boots back on and winning with this team."

Roberts, a stand-out performer in the last two British and Irish Lions' tours to South Africa and Australia, said the squad would, however, travel to London "with confidence".

"It's our only option," he insisted.

"Because we can't just go over there and fold. On Saturday there were glimpses of some attacking promise, and our pattern is starting to come together.

"But we have to be more accurate, defend better, and just stay mentally focused. It's as simple as that: stay focused, do the right things, make the right calls at the right time. And hopefully our quality will shine through."

The return of Jamie Roberts, who missed Wales’s Autumn Internationals, is shred of good news for the Welsh RFU who are having a torrid time of late.

National and British Lions Captain Sam Warburton, who is set to see a specialist about his shoulder injury picked up against Australia, has given the Welsh Rugby Union a deadline of today (Wednesday) to come up with an offer to keep him in Cardiff.

Warburton could be the next in a long line of Welsh exiles to leave their country of birth and play under much more lucrative contracts in England and France.

Today representatives from the Wales’s four rugby regions – Ospreys, Scarlets, Blues and Dragons – will meet with the Welsh Rugby Union in attempt to solve their differences on club salary caps and European rugby next season.

The four regions have all stated they want to play against English clubs rather than be forced by the WRU to compete in the Heineken Cup.

The regions could take legal action for the right to play in cross-border tournaments without WRU permission.

There is increasing speculation the regions will not sign the participation agreement with the union before the 31 December deadline.

Reports have linked the quartet with a bid to join England's Premiership as rows over the future of European competitions continue.

Last week the English clubs confirmed they would not be involved in the competition next year.

Rugby Football Union chief executive Ian Ritchie is still confident English sides will compete in Europe next season, insisting there is still "a deal to be done".