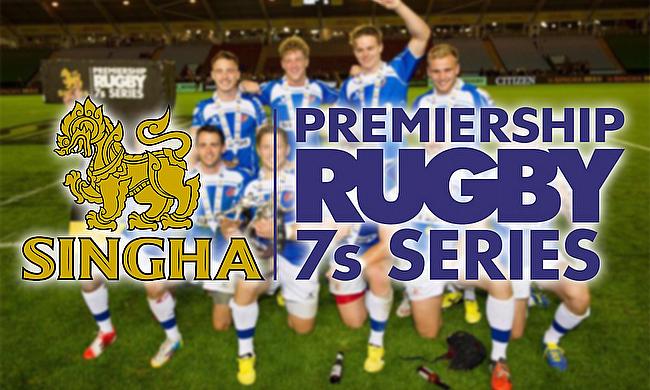 Newport Gwent Dragons were victorious in the Cup Final
©Singha

The Singha 7s tournament came to a dramatic conclusion on Friday night as Newport Gwent Dragons were crowned champions in the cup competition, whilst Exeter Chiefs took home the plate, the second tier prize.

Finals day kicked off at the quarter-final stage, with the winners and runners-up of the qualifying legs locking horns to book a place in either the cup or plate semi-finals later in the evening.

The Dragons, winners of the tournament’s Cardiff leg, got the ball rolling with a comfortable 26-10 victory over Sale Sharks in the opening game of the night. The Welsh region were much the better side, stretching the Sale defence at will, and scored one of the tries of the night when Angus O’Brien stepped his way through four Sale defenders. The loss resigned Sale to a place in the plate, but an excellent performance and two tries from captain James Mitchell was certainly something for Sale fans to be happy about.

Gloucester joined the Dragons in the cup semi-finals with a narrow 31-26 victory over the hosts, Harlequins, but after racing into a 26-0 lead at half-time, the Cherry and Whites were uncharacteristically loose in the second half. Winger Robbie Nairn led a valiant Quins comeback, scoring two tries in the process, but it was not quite enough as they slipped into the plate competition.

Wasps started their quarter-final encounter with Exeter slowly, only leading 7-5 at half-time, but their star-studded squad soon moved through the gears and ended up piling on 26 second half points to beat the Chiefs, 33-5. Scrum-half Dan Robson was the hero for Wasps, scoring two tries, whilst Exeter’s Sam Skinner continued his impressive form in the competition, albeit in a losing cause.

The last quarter-final, Newcastle Falcons vs Scarlets, broke the trend of qualifying leg winners beating runners-up, as the Scarlets upset the odds and saw off Newcastle, with all their Scotland sevens internationals, 31-26. Gavin Lowe had sent Newcastle into the break in charge, but the Scarlets came out firing in the second half, scoring three tries to Newcastle’s one and booking a semi-final meeting with Wasps.

The first semi-final saw Sale and Quins trade blows for seven minutes, with the game finely balanced at 19-all going into half-time, but that equilibrium was not to last, with Sale settling into cruise control in the second half. Tries from Mitchell, Mark Jennings, Cameron Neild and Conor Dever propelled Sale to a 45-24 victory and a place in the plate final.

Exeter booked their place in the final shortly after, grinding out a hard-fought, 14-12 win over Newcastle. The loss curtailed a disappointing night for Newcastle, whose array of professional sevens players had marked them out as one of the pre-tournament favourites.

The plate final brought one of the most compelling games of the night, with very little separating the Exeter and Sale sides, both of whom were clearly intent on ending the tournament with a tangible reward. The Chiefs took a hard-earned 12-7 lead into the interval, thanks in large to excellent work from their forwards, Skinner and Sam Simmonds.

Scrum-half Stuart Townsend extended Exeter’s lead early in the second half, but Mitchell, Townsend’s fellow England U20 half-back, quickly replied with a try of his own to keep it a one-score game heading into the final minutes. The Chiefs maintained their composure however, and though they traded late tries with Sale, they were able to record a 26-19 victory and win the plate competition.

The Dragons rose to the occasion impressively in their semi-final with Gloucester, defeating the defending champions, 19-14. The Cherry and Whites were unrecognisable from the side which sauntered to victory in the Kingsholm qualifying leg and the Dragons were able to capitalise on every mistake the Premiership side made. After the Welsh side raced into a 12-0 lead early in the game, Gloucester struggled to live with the pressure of chasing the scoreboard.

There was no such upset in the second semi-final, as Wasps weathered some early pressure to run out 33-12 victors over a plucky, but outgunned, Scarlets side. Alex Lozowski took over from Robson as Wasps’ spark plug, running in two tries and controlling the game with an authority that Dai Young will struggle to ignore as the 15-a-side season inches closer.

Elliot Frewen got the Dragons off to a fantastic start in the Anglo-Welsh final, diving over a breakdown to dot down and give the Welsh side the lead. That lead was soon cancelled out by the searing pace of Christian Wade however, with the winger showing the Dragons defence a clean pair of heels. Neither team was able to add to those scores in the first half, leaving the game finely balanced at 7-7 heading into the final seven minutes.

The region made another fast start in the second half, with James Benjamin cruising over in the first two minutes and though not converted, the score gave the Dragons a five-point advantage. The class of Wasps briefly shone through as Robson prevented a Dragons try and created a Wasps score in the same moment, but with the clock in the red, a late and decisive try from Harrison Keddie stole a 17-14 victory for the Dragons, who will now take the cup back across the border.