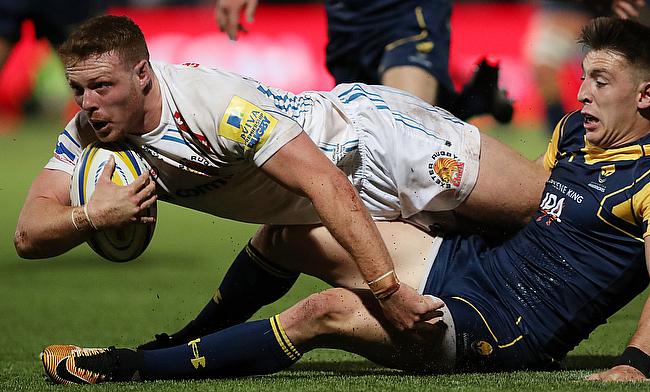 Sam Simmonds and Jonny Hill scored three tries apiece as Exeter Chiefs hammered Worcester Warriors 59-7 in the latest round of the Gallagher Premiership at Sandy Park.

This is 13th win for Exeter Chiefs from 17 games as they increased their lead over second placed Sale Sharks to 14 points while Worcester Warriors are at 10th place. This was also second joint highest win for Exeter in terms of point difference.

Rob Baxter's men got off to a terrific start when Sam Simmonds scored at the back of the line out in the eighth minute and three minutes later Hill also went over the line. Joe Simmonds kicked both the conversions to take them to a 14-point lead.

Worcester started to gain possession but were kept out by stern defence from Exeter Chiefs. Sam Simmonds scored his second try in the 26th minute and they went on seize the bonus when Jack Nowell on his return dotted down around the half-hour mark.

Just before the break, Hill went on to complete his hat-trick as Exeter completed the opening half with a 38-0 lead.

The home side extended their momentum into the second half when Alex Cuthbert sent an inside pass to help Stuart Hogg cross over and they thought they scored their eighth try but Luke Cowan-Dickie's touchdown was disallowed in the 50th minute.

Nevertheless, six minutes later they Jacques Vermeulen's try took Exeter's tally over 50 points before Sam Simmonds completed his hat-trick in the 63rd minute. With 10 minutes left in the game, Ashley Beck helped Worcester get their first points but eventually they succumbed to a 52-point defeat.