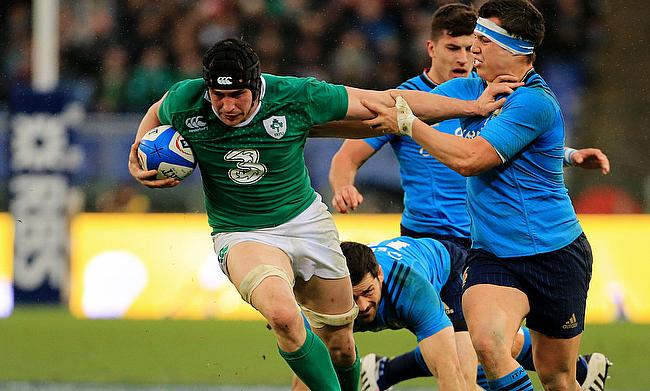 The 30-year-old sustained the injury during a training session on Monday and had to undergo scans on Tuesday to analyse the extent of the damage.

With Ireland already missing the services of back-rowers Jack Conan and Dan Leavy, O'Donnell's possible absence means British and Irish Lions trio Sean O'Brien, CJ Stander and Peter O'Mahony are all in contention for a start in the back-row.

"Tommy O'Donnell picked up a bit of a shoulder bump in training yesterday so he's due to have a scan at some point today," said Ireland forwards coach Simon Easterby.

"Jack Conan sat out training, he just had a heavy workload.

"Dan Leavy had a bit of tightness in his hamstring, obviously he played at the weekend. Again it's just managing his workload.

"It's just about being sensible and earmarking players who may have potential weaknesses.

"If you know about things, at least you can prepare for that and not take any unnecessary risks."

Auckland born Connacht centre Bundee Aki is primed for his Ireland debut after qualifying to play for the country on residency grounds. His inclusion to play for Ireland has sparked criticism on World Rugby's residency qualification rules and also Irish Rugby Football Union's decision to overlook Simon Zebo, who is set to ply his trade overseas next summer.

However, Easterby downplayed the issue and stated that Aki is fully motivated to do well in the upcoming series.

"The rules are the rules and Bundee has invested time into moving to Connacht and has played exceptionally well while playing here," said Easterby.

"There is always the question over eligibility of players, whether it's residency, grand-parentage, parentage if players aren't born in the country. That will continue.

"Bundee and other players will be potentially singled out but he's certainly fitted in well and has trained well. We're really happy with what he's already shown in terms of his training.

"I'd say he wouldn't be listening to, or privy to that criticism.

"He's a confident character, you've seen him play. A lot of you would have met him, he's confident in his ability.

"He wouldn't have put himself in this position had he not had the confidence in himself and in the group that they back him in that decision. He's not the first and he won't be the last player to do it."

Billy Burns to start for Ireland against Georgia