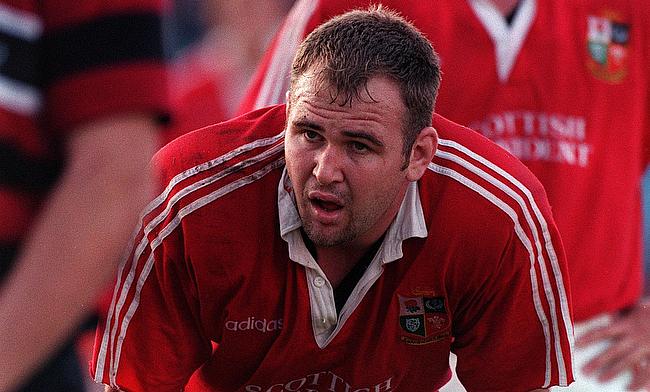 There’s a faint chorus of ‘Lions, Lions, Lions’ reverberating around The Gabba, but soon one of the most spine-tingling chants in rugby is to grow louder and louder.

“I came out of the tunnel last but one so when you finally come to reach the pitch, everyone is in full voice and it was just the best experience ever.”

These are the words of Scott Quinnell as we reminisce about his memories of representing the British and Irish Lions, and lodged at the forefront of his mind is the ‘sea of red’ he witnessed in Australia back in 2001.

The Lions is something that is woven into the fabric of Quinnell’s life, given his father Derek, uncle Barry John and godfather Mervyn Davies all pulled on the famous red jersey, but the waves of travelling support is another aspect which makes a tour so special for the 48-year-old.

Quinnell is not alone in thinking this or harking back to Brisbane two decades ago, but for this current British and Irish Lions squad, the extra inspiration of 40,000-plus fans flocking to Johannesburg and Cape Town is absent due to the coronavirus pandemic.

For the Welshman, he is always looking on the bright side and his work for Sky Sports will undoubtedly help Lions supporters take their minds off the disappointment of not being in South Africa.

Earlier this week, he was back on home turf to witness a bespoke piece of artwork commissioned by Sky Sports and streaming service NOW in the stunning grounds of Cardiff Castle before roaring his way up the M6 in his ‘FanVan’ to present from Sandbach RUFC during the Lions’ recent clash with South Africa ‘A’.

“I think the artwork lets the Lions know that we are thinking about them,” Quinnell tells TRU. “The hardest part of this Lions tour, in particular, is the fact that there isn’t going to be 40,000 Welsh, Irish, English and Scottish fans coming together as one. I think this piece of art embodies everything because it comes together beautifully.

“I am very fortunate that I am in the FanVan again as well. OK, we are not out in South Africa, but we are showcasing the brilliant pieces of Great Britain and Ireland.  People know that we are around and I guess it does generate a little bit of excitement that the Lions always brings. To now do it in 2021 when it is most needed and now the fact people can come together, they can still get an idea of what the Lions is all about.

“I am not a player anymore. I am literally doing this as a British and Irish Lions fan and it is great to reminisce with other people about that second Test in Wellington when we won in 2017 or in Auckland where we drew that one in the dying moments. To have that affinity with people, we are very lucky to be a part of it. We get a lot of toots of the horn and a lot of waving so we get the feel-good factor from the whole of the nation.”

Quinnell recently visited Cornwall where he bumped into his former Lions teammate Tim Stimpson on the beach. The pair shared a cold beer and recalled some ‘wonderful times’ playing in the iconic red jersey as both were involved in the tour to South Africa in 1997.

For Quinnell, the heartbreak of a double hernia operation prematurely ended his involvement in that trip before the famous series win and for a moment, it looked like a current Welsh legend would also miss out on the chance to face the Springboks.

However, Lions head coach Warren Gatland confirmed on Wednesday that original tour captain Alun Wyn Jones would play a part against South Africa after flying out to rejoin the squad just 18 days after dislocating his shoulder.

“The one thing you always say about Alun Wyn Jones, he works hard, he’s an incredible rugby player and he is intense in the way that he plays and the ways that he trains,” Quinnell says. “After the last few weeks, he is probably the hardest man I know! Some players would take that period of time to just get over dislocating a shoulder! It takes a special player to recover the way he has.”

Alun Wyn Jones has made an incredible recovery and been given the all-clear to return to the #LionsRugby Tour ??????

The return of the Wales second-row is nothing short of sensational and while Gatland will be delighted to have his talismanic leader back for the three-match Test series which begins on July 24th, it gives the Lions boss more selection dilemmas ahead of their opening clash against the world champions.

As the clock begins to wind down towards the first Test in Cape Town, Wednesday’s physical and intense battle against a star-studded South Africa ‘A’ side helped light the fuse on the series. It had been billed as the unofficial fourth Test and it certainly provided the perfect appetizer before both the Lions and the Springboks bare their teeth for the main course next weekend.

“There have been opportunities for everyone with all of the shuffling around the side, but every side I have felt which has been picked so far by Gats, I have thought it is a strong one!” Quinnell adds. "Because there are only 37 players on tour, every side is going to be a strong one. Back in the day, you used to be able to pick two or three sides but you can’t do that anymore.

“Josh Adams [who missed Wednesday’s match to be on a Zoom call as his wife gave birth] has played three games, but he was only supposed to play two. He played the third game at full-back and he has got eight tries in three games! He has been immense and he has put himself in a great position.

“Duhan Van der Merwe, he is just scoring tries for fun out there. It was great to see Anthony Watson come in and score, Louis-Rees Zammit has been scoring, Bundee Aki and Chris Harris have been very good. Hamish Watson has done well, Tadhg Beirne has been immense at six, Courtney Lawes has been good at six, but he could be in the second-row so how on earth do you make those choices! Across the board, it is tough and I do think there is an argument for everyone to play!”

After a stern test against South Africa ‘A’ - who had 11 members of the Springboks World Cup-winning side in their starting XV - both teams insisted they took the morale victory from their first duel and now head into their respective final warm-up matches this weekend.

For the Lions, they take on the Stormers and Gatland has opted to reshuffle his pack. Marcus Smith will make his debut in Cape Town whilst Alun Wyn Jones is fit enough to occupy a place on the bench.

Elsewhere, there is a return to the starting XV for Robbie Henshaw - who hasn’t featured for the Lions since their fixture against Japan - whilst Stuart Hogg is back from self-isolation to captain the team.

For many on Saturday, they will be playing for a place in the 23-man squad ahead of the opening clash with South Africa and Quinnell ended our interview by reflecting on what it is like for a player who is competing for a spot in the Test side.

The Welshman did not feature in the Lions’ final tour game before their first meeting with the Wallabies 20 years ago and he recalls the moment he was named in the starting XV for the opening Test as a mixture of nerves and excitement began to course through his veins.

“I think the first feeling is that you hope you have done enough,” Quinnell says. “Back in the day, not getting picked in that Tuesday game was a relief! It was then a wait through Wednesday and Thursday until Graham [Henry] announced the side.

“When the old-fashioned flip chart was turned over, you looked straight at the No.8 position and when you saw your name was on there, I was just overwhelmed. You want to just get up out of the meeting and go and phone your wife! You just want to tell her it is done, that you have made the team.

“I think then is the realisation that you are representing Great Britain and Ireland. On the Saturday morning, I was lucky enough to get my jersey off Willie John McBride. I went to shake his hand and he said to me; ‘You’re Dad would be very proud of you now’ because he played with my father in ’77 and that was emotional. I had to fight the jersey off him really because he had such a big, strong handshake. You felt like he wanted to play himself. He wanted to go for a sixth tour!

“For me, nothing is set in stone so far during this current series. I have never seen a Test series where selection is so much like a chess match and it will be about making the right moves. It will be very interesting to see which side Gats goes for, but at the end of the day, we are Lions supporters so whichever XV is out there, we will be at full voice across the nation even though we can’t be there.”

Tune in to Sky Sports The Lions to watch every game of the Lions tour of South Africa live.