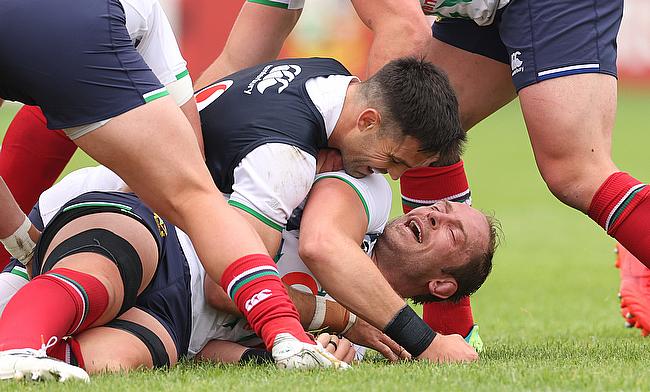 Alun Wyn Jones is back in the Lions' matchday squad
©INPHO

Wales skipper Alun Wyn Jones has been named on the bench for the British and Irish Lions' tour game against Stormers to be played in Cape Town on Saturday.

Jones has made a stunning recovery from a dislocated shoulder that he sustained during the warm-up match against Japan last month but now has forced his way into the matchday squad after heading to South Africa on Thursday.

The 35-year-old will provide cover to Adam Beard and Jonny Hill while Marcus Smith will make his debut for the Lions and will start at fly-half as Finn Russell and Dan Biggar are nursing injuries while Owen Farrell has just recovered from a rip problem.

Stuart Hogg, who was on an isolation after being a close contact of a positively tested member returns to captain the side at fullback while Robbie Henshaw will be playing his first game in the tour after recovery from hamstring injury. Henshaw will be accompanied by Elliot Daly at midfield.

Duhan van der Merwe and Josh Adams are at left and right wings respectively while Scotland's Ali Price will form halfback partnership with Smith. Rory Sutherland, Luke Cowan-Dickie and Tadhg Furlong will be part of the front row while Hamish Watson and Tadhg Beirne have been the preferred flankers joining Jack Conan in the back row.

“It is particularly pleasing to be able to name Stuart Hogg in the squad. He’s not had much luck on Lions Tours to date, so it’ll be great to see him cross the whitewash again with the captain’s armband," said Jones.

“I’m also delighted that Marcus will get his first start in a Lions jersey. I’ve been really impressed with his attitude since coming into camp this week; he’s been like a sponge for information.”