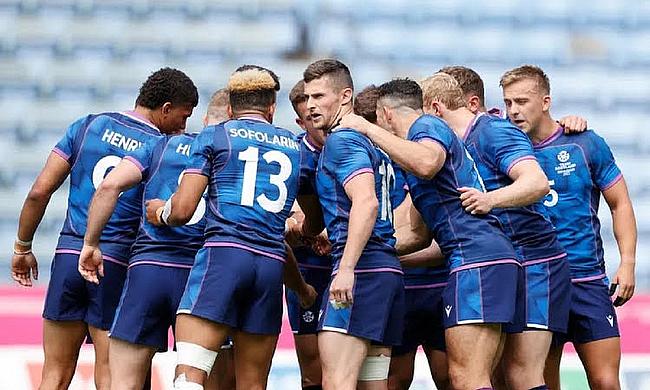 The opening day of the men's sevens in the Commonwealth Games in Coventry saw Scotland and South Africa confirm their places in the quarter-finals.

Barring South Africa and Scotland, New Zealand, Fiji and Kenya also had a productive day remaining unbeaten in the two matches but will have to wait on Saturday's result to make it to the top eight.

New Zealand kick-started their proceedings with a dominating 63-5 win over Sri Lanka and then managed to edge out Samoa 19-17 to take the top position with six points. They will now line up against England in their final game of the group on Saturday morning.

England had a tough start to the competition as they suffered a massive 0-34 loss against Samoa. Steve Onosai starred for Samoa with a hat-trick. The Pacific Island side almost went past New Zealand after having a 7-17 lead in the opening half but conceded 12 unanswered points in the second half which meant they now will have to beat Sri Lanka in the second day to make it to the next round.

England are precariously placed as their win over Sri Lanka meant they have kept their hope alive for making to the next round but now they need to beat New Zealand in the final round.

South Africa and Scotland showed their class as they registered wins over Tonga and Malaysia to book their berth in the quarter-finals. While South Africa had a 46-0 and 36-5 wins over Malaysia and Tonga respectively, Scotland had a 50-12 and a 41-0 wins over the two sides as they now have six points from two games.

While Canada started their campaign with a 31-0 win over Wales, Fiji registered a 52-0 victory against Zambia in the opening round. Nevertheless, Fiji managed to beat Canada 19-12 in the second round to take the top honours for the day. Canada with a better point difference are at second place with four points while Wales managed to bounce back with a victory over Zambia to be in the race.

Canada will face Zambia on Saturday while Fiji and Wales will battle out for a place in the final round.

Kenya impressed on the opening day with a 27-14 win over Uganda and followed it with a 45-0 victory over Jamaica to finish the opening day on the top with six points. Australia too had a terrific 62-0 win start over Jamaica but Uganda surprised them as the two teams settled for a 12-12 draw in the second round which meant the battle for the qualification is wide open on the second day.

Uganda will be facing Jamaica while Australia and Fiji will be taking on each other on Saturday morning.

On day one of the women’s competition in Coventry Australia and Fiji secured their places in Saturday’s semi-finals, by overcoming Scotland and South Africa to ensure their safe passage from pool B.

In pool A reigning Olympic and Commonwealth Champions New Zealand began their campaign in fine form with a 45-7 win against Canada before a record-breaking 60-0 triumph over Sri Lanka which included a sensational six tries for Michaela Blyde.

New Zealand will take on England in a crucial third and final pool match on Saturday. The hosts had mixed fortunes on day one with a 57-0 win over Sri Lanka, which saw Ellie Boatman score four first half tries, followed by a 26-19 defeat to Canada, which means they are likely to have to beat New Zealand to progress to the semi-finals.