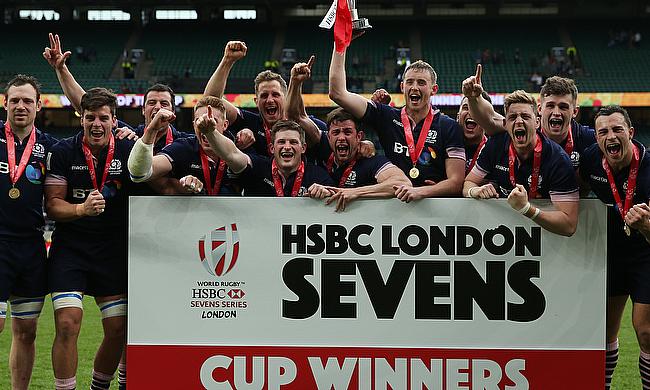 South Africa finished runners-up for the fourth consecutive time as Dougie Fife's last minute try snatched the game away from them to secure a maiden World Rugby Sevens Series title for Scotland in their 27-26 victory at Twickenham.

Earlier, Scotland defeated England 17-0 in the quarterfinals, while managing to edge out USA with 24-17 victory in the semi-finals to reach the final for the first time.

With 30 second to go in the game, South Africa had a handy lead of 26-15 to drive them home, but Edinburgh's Fife scored two tries, with one being in the extra time while Scott Wight added a crucial conversion to take Scotland to 27 points.

Speaking to Sky Sports after the game, Fife said it was an "unbelievable feeling" and his team was confident of going all the way in the tournament.

"It's an unbelievable feeling," Fife said.

"This team have come a long way, we truly believe we can beat anyone on our day and today we showed that. I think we surprised a few people."

Despite, losing in the semi-final against South Africa, Jarryd Hayne starred Fiji had done enough to secure their overall title.

Meanwhile, head coach of Scotland, Calum MacRae was delighted with the performance of his team and believed the hard work they put prior to the tournament reaped huge benefits.

"They put absolutely everything into it; they're a pleasure to work with week to week. They're a real honest bunch and it's nice that the guys get the rewards at the end of today."

USA sealed the third spot after defeating Fiji 26-19 in the play-off while New Zealand defeated Argentina to win the Plate final which gave them them the fifth spot.

Wales ensured they finished ninth after defeating Australia 24-19 in the bowl final.

The London Sevens was also the last of the HSBC World Sevens Series and now the teams will be competing in the Olympics in Rio de Janeiro in August.