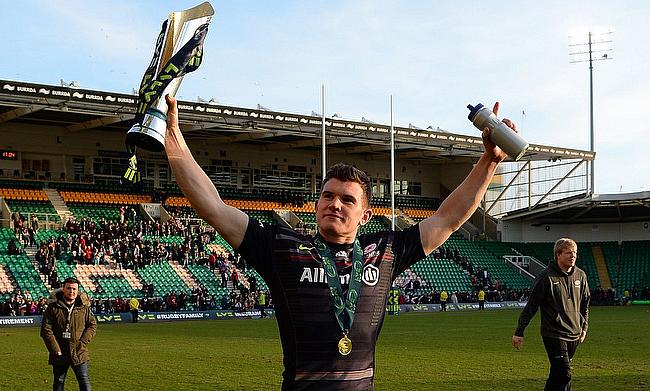 Saracens survived a late scare from Leicester Tigers as they clinched a 22-27 win in their Gallagher Premiership face-off at Welford Road on Sunday.

This is the eighth victory for the Premiership champions from as many games but are second in the table behind Exeter Chiefs while Leicester Tigers are positioned at sixth place.

A fourth minute penalty kick from Joe Ford kick-started the proceedings for Leicester Tigers but that remained the only points in the game for most part of the first half as the slug-fest continued.

The Sarries finally responded in the 26th minute and in a matter of a six minutes they took control of the game. Tries from Ben Spencer (27'), Alex Lewington (29') and Alex Lozowski (31') with Spencer also managing all the three conversions meant the visitors had a 3-21 lead heading into the break.

The Tigers showed more intent in the second half with Brendon O'Connor crashing over the line in the 48th minute and Ford's conversion reduced their trail to 11 points which was increased to 14 when Spencer kicked his first penalty at the end of the third quarter.

With the Welford Road unit applying intense pressure, Saracens had both Ben Earl and Schalk Burger sin-binned in the 64th and 66th minutes respectively and the Tigers made full use of the numerical advantage with O'Connor and Matt Smith scoring back to back tries. Ford also kicked one conversion as the scoreline became 22-24 with 10 minutes left in the game.

Unfortunately for the Tigers they could not quite press on from their new found momentum and instead it was Spencer with a 78th minute penalty goal capped off a 22-27 win for the Sarries.

“The last 25 minutes of the first half we scored some great tries, solo efforts for the most part, so maybe the score didn’t reflect how even the first half was," said Saracens director of rugby Mark McCall.

“We gave away some pretty dumb penalties at the start of the second half and put ourselves under pressure.

“Until we went down to 13 men it was a pretty even game and then it was an incredible defensive effort.

“There were some outstanding individual performances, Brad Barritt as the captain led the effort in terms of putting his body on the line.

“It is a huge experience for the younger players in our squad to come to Welford Road. To be 21-3 up and comfortable and then go through that second half but find a way to win is a great experience.”