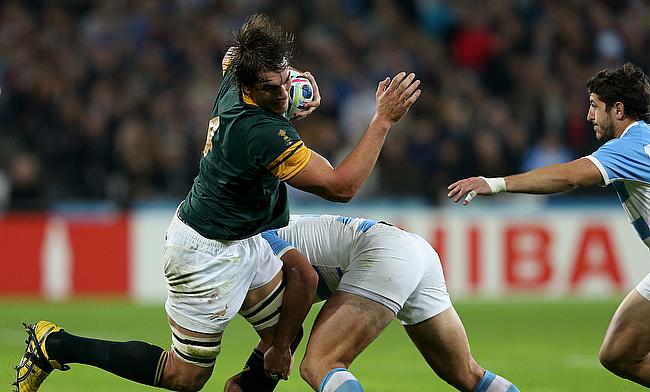 South Africa's Eben Etzebeth will not be joining Saracens
©PA

Earlier, reports emerged that the double champions were in talks with the Springboks lock to find a replacement for Alistair Hargreaves, who was forced to retire with injury but McCall insisted that they are looking for a long-term solution.

"I don't think that will happen. Alistair has retired and we are looking for somebody who is available and eligible and they're quite difficult to find at this time of year," McCall said.

"We've been exploring a couple of options and Etzebeth was one of them, but that looks like it won't happen.

"Signing him would have solved a problem until the end of January, but after that we'd have had to find a different solution.

"It's very hard to find someone who is good enough, who is available to get into this country and who is also out of contract.

"There are some second rows who become available at the end of January so we thought we'd get a double solution, but it doesn't look like it will happen."

The Saracens boss also stated that a decision on Owen Farrell, who is recovering from a back problem will be taken on Thursday.

"Owen didn't react well after last Wednesday's session, but he's much more in contention this week than last week.

"Owen's been all good with his kicking and he's done some tackling as well, so hopefully he'll be available for selection. It's quite a big shout."

Saracens will begin their European Champions Cup title defence against Toulon on Saturday.