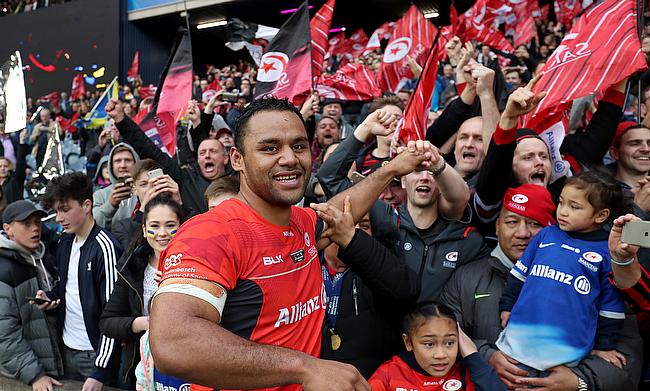 Saracens won the Aviva Premiership for a fourth time with a 27-10 win over Exeter Chiefs at Twickenham on Saturday.

Mark McCall's side ended Exeter's title reign with an impressive performance securing a comfortable four-try victory, making it a total of 10 wins in their last 11 appearances at Twickenham.

After dominating the possession and territory in the opening five minutes, Joe Simmonds gave Exeter the lead with a penalty kick on the sixth minute.

Sarries got their first real chance on the 15th minute after a superb Owen Farrell kick in midfield as Alex Goode volleyed the loose ball forward setting it up nicely for Billy Vunipola, who crashed through two tackles and went across the line to score the first try of the match. Farrell added the extras.

A few minutes later, Goode and Sean Maitland combined to release Chris Wyles on the left wing, who ran unchallenged in the corner to score the second try for the Sarries. Farrell missed-out on the conversion from the touchline.

Saracens controlled the tempo and territory for the remainder of the half as they held on to their nine point advantage leading into the half-time break.

Saracens are potentially just 40 minutes away from being champions! They lead at the break through tries from @bvunipola and @ChrisWyles

Follow the blog on our app and right here ??https://t.co/rSFZEPvXQR … pic.twitter.com/UrWr4ebTo1

On the 48th minute, Wyles crossed the line for his second try of the match following some monstrous carries from the Vunipola brothers. Farrell made no mistake with the conversion as things started to look bleak for the Chiefs.

Saracens hooker Schalk Brits was sin-binned on the 60th minute for helping his side collapse an Exeter drive illegally as the Chiefs finally got the ball in attacking positions and replacement Gareth Steenson went over off the back of a scrum to score the first try for his side.

The try-scorer then added the extras, thus reducing the Sarries lead to nine points with about 16 minutes left on the clock.

On the 70th minute, Michael Rhodes was stopped just short of the line as the Sarries used the penalty opportunity to score a three-pointer.

With a minute to go for the final whistle, a brilliant offload from Brits to Goode allowed Nathan Earle to cross over in the corner for his 7th try of the season. Spencer failed to score the conversion but it hardly mattered on the outcome of the match as the Sarries got their hands on the trophy for the third time in four years.

What a game! This moment will live for them forever. Keep following our blog for all the latest ??https://t.co/NzXhav9bRi pic.twitter.com/mmQtdHQcJk