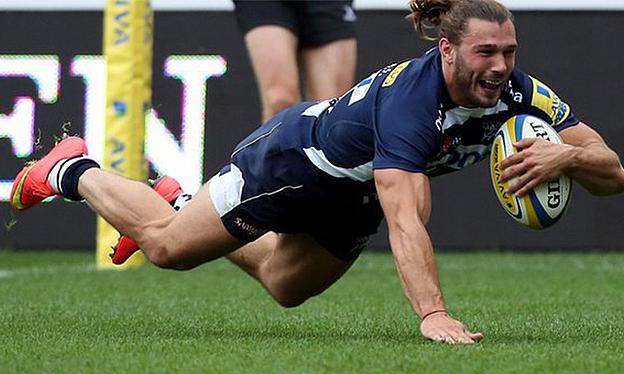 Tom Arscott scored his fifth Aviva Premiership try of the season as Sale secured their second victory with a 25-14 triumph over Wasps.

Tries from Arscott and Chris Cusiter gave the Sharks a 12-7 advantage at the interval, while the visitors' response came through Nathan Hughes' touchdown.

Despite two defeats in their opening four games to Saracens and Harlequins, an impressive victory over defending champions Northampton suggests that Wasps have the ability to improve on last season's seventh-placed finish.

They were up against a Sale side who would have been frustrated by their three league losses to date, but it was the hosts that opened the brighter.

Sharks immediately put pressure on the visiting scrum and, following an infringement at the set-piece, Steve Diamond's men decided to go for the corner.

Although the maul was comfortably halted, the home side showed impressive patience and good hands to send Arscott across the whitewash.

It was an ideal start for Sale, but the Adams Park team, with the quality of Alapati Leiua and Christian Wade in the backline, are always a threat and they dominated the next 20 minutes.

Leiua displayed his balance and footwork throughout the opening period and it was his pass which sent Wade away down the right-hand side.

The move broke down but it was not long before Wasps had a try of their own. Ironically, it came through their driving game as Sale failed to deal with the pressure exerted.

Despite being on the front foot, Dai Young's men then proceeded to let Sale back into the contest when Will Helu was sin-binned for taking out Brady in the air.

Not content in handing the hosts an extra man, the visitors also gifted the Sharks their second score when Charlie Davies' attempted clearance kick was charged down by Cusiter and the scrum-half followed up to touch down.

Cipriani landed the conversion - his only successful kick of the half out of five attempts - as the home side went into the break 12-7 ahead.

Just like in the opening period, Sale started the second 40 minutes on the front foot and their pivot's drop-goal gave them an eight-point buffer.

The scrum was also an issue for Young's team and another infringement from the front-row allowed Cipriani to take the Sharks 18-7 in front.

Once again, Wasps looked to hit back and they were a threat when they managed to keep possession, but the Manchester outfit's last-ditch rearguard remained stout.

Openside flanker Dave Seymour was crucial to their defensive resilience but he could not prevent Wade from going over and reducing the deficit.

Sale were now holding on with Wasps pressurising their defence, but a piece of quick enabled Brady to go over in the corner and rubberstamp the win.