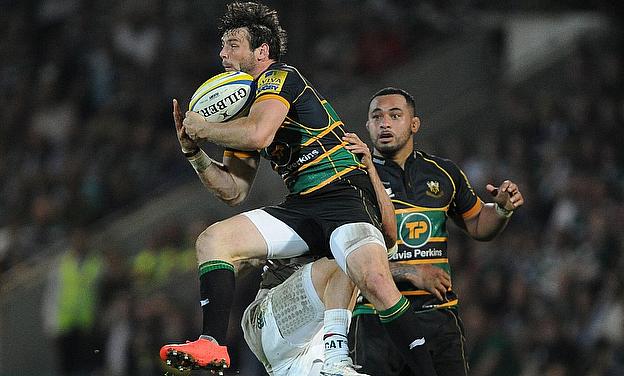 Northampton defied Salesi Ma'afu's red card and the weight of history to bludgeon into the Aviva Premiership final with a 21-20 victory over Leicester in a bad-tempered battle at Franklin's Gardens.

The Saints overturned a 17-6 half-time deficit and shrugged off tighthead prop Ma'afu's dismissal for punching Tom Youngs to sneak into the May 31 showpiece.

Northampton denied Leicester a 10th successive Premiership final and a fourth-straight victory against their east midlands rivals at Franklin's Gardens.

Not since 1988 have Leicester won four in a row at Northampton, and that record remains, as the Saints produced a startling comeback to clinch their second-straight Premiership final appearance.

This time around the Saints shrugged off battling more than 20 minutes with 14 men, to produce a sucker-punch, last-gasp victory.

The officials failed to act when Goneva tackled Calum Clark with the ball dead in touch, and Clark appeared to knee Leicester's Fijian wing in the face in reply.

Flood opened the scoring with a penalty on 10 minutes, before Phil Dowson powered home after Leicester bungled their five-metre line-out, but there was to be no try - referee JP Doyle ruled an early lift by Northampton.

Saints won a second penalty and fly-half Stephen Myler stepped up and bisected the posts without issue to level at 3-3.

Northampton were level for all of a minute. Leicester bullocked through midfield, Flood set Mathew Tait stepping through traffic into the shadow of the posts, and quick ball allowed Flood an easy palm-off for Tuilagi to score.

Flood converted the game's first try to wrestle back the initiative before Myler doubled his and Saints' tally with his second penalty.

One driving line-out later, prop Logovi'i Mulipola rumbled towards the whitewash and Youngs squirmed home as he marked his 100th Premiership appearance in jubilant style.

Flood's conversion and a fine cover tackle from Tait on Collins meant the visitors took a 17-6 lead into the break.

Goneva's madcap quick line-out almost gifted Northampton a try on the restart: Leicester escaped, but not for long.

Bowden received a yellow card for his dangerous tackle on Collins, with the home support baying for red. Myler slotted the goal to cut Saints' deficit to eight points.

After lengthy deliberation Tigers hooker Youngs was sent to the sin-bin, while Ma'afu was sent off just ahead of the hour-mark.

Bowden then returned with Leicester once again stubbornly not conceding a try when down to 14 men.

Goneva and Saints replacement Clark clashed in touch as tempers boiled over, only for Doyle to ignore the melee completely.

Leicester's impressive rearguard was eventually punctured when North capped a textbook line-out drive, with Saints finally over the whitewash. Myler's nerveless conversion cut the deficit to one point.

The Tigers tiptoed back to 15 men with as many minutes on the clock, and replacement Owen Williams landed a penalty to extend the visitors' lead to 20-16.

Northampton punted a routine penalty to the corner with four minutes to play, pressing for the killer score.

Myler struck the post with his touchline conversion, to leave Saints 21-20 ahead with 30 seconds to play and the hosts played out the time.