Hartley pushes for a Saints return 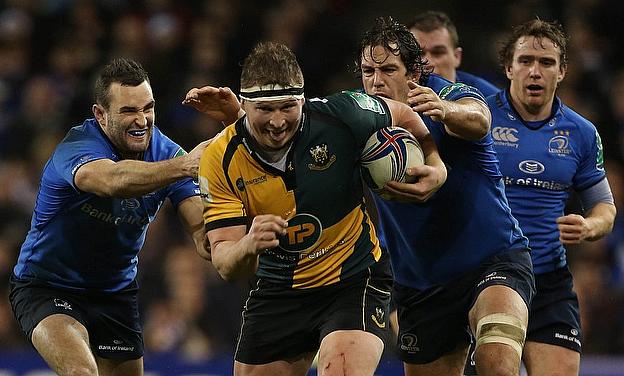 Saints rugby director Jim Mallinder revealed Hartley is yet to take any contact in training as he fights to shrug off shoulder trouble suffered in March.

The 28-year-old should recover for England's three-Test June tour to New Zealand, but remains under pressure to be ready for Saints' Amlin Challenge Cup final on Friday night.

Northampton follow Friday's European battle with Bath in Cardiff by taking on Saracens in the Aviva Premiership final at Twickenham on May 31.

Mallinder remains hopeful Hartley can appear in both showpiece contests, but admitted his club captain is at the mercy of the medics.

"Hopefully Dylan will be back, we're not too sure, he's improving by the day, but he's got to be fit to play, and our other hookers are playing well," said Mallinder.

"It's a strength thing with Dylan now, I think in overall terms his shoulder has improved, he's out there doing running all the time.

"The physios are constantly doing tests on him, comparing it to the other arm, to see where that is.

"It's got to reach a certain level before they're happy for him to take contact.

The New Zealand-born front-rower watched on as Saints overturned a 17-6 deficit to sneak past Leicester 21-20 into the Premiership final in Friday night's play-off battle.

Northampton will return to Twickenham a year on still hunting their first league trophy, but could well be forced to do without prop Salesi Ma'afu.

The Australian was sent off for punching Tom Youngs in Friday's victory over Leicester, but Mallinder hopes his frontline tighthead will not face further censure.

The Tigers had Dan Bowden, Youngs and Vereniki Goneva sin-binned in an ill-tempered affair, leaving Mallinder hopeful the officials will appreciate the derby intensity.

"He didn't start it, and that's not an excuse, but hopefully the whole game will be taken into consideration," said Mallinder.

"It was hard for (referee) JP Doyle out there, it was a very, very tense game and there were some massive decisions.

"Some of those yellows could (have) potentially gone on and been reds, very, very close, so hopefully whoever looks at it will be sensible, lenient and say that the sending off was sufficient.

"Hopefully he won't face a ban, but that's what we've got to cater for, you never know who will be injured or sent off, we've got a strong squad and we'll trust in it as always."

Mallinder backed Saints to handle the pressure of two successive finals, after rotating his squad in the latter stages of the regular season in preparations.

British and Irish Lions prop Alex Corbisiero is back after long-term knee trouble, and Mallinder expects him to play a key role in the silverware hunt.

"We've rotated the squad over the last five weeks or so to make sure no one has played week to week, with this potential run of matches in mind," said Mallinder.

"So now we're here I think we're very well prepared for that, and that all our players will be fresh.

"Hopefully that allows us to go full-tilt at both games, and it's going to be an exciting couple of weeks.

"It's good to see Corbisiero back, that's his second game back, he's getting a bit of game time and so hopefully he can have two very big weeks now."