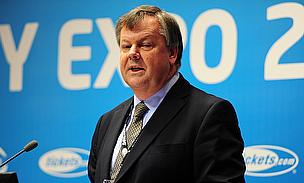 The Rugby Football Union believes the English game has yet to be affected by spot-fixing but is determined to remain vigilant to prevent it occurring.

An RFU official attended a summit with ministers in Whitehall on Tuesday morning to discuss corruption, as one of five major sports represented at the meeting.

It followed the arrest of six people, including Blackburn striker DJ Campbell, following an investigation into football by the National Crime Agency (NCA). The six have each been bailed until April.RFU chief executive Ian Ritchie is confident rugby union has so far remained clean.

"Through the Gambling Commission it's been made very clear there are no dubious betting patterns in rugby. There has been no sign of that," Ritchie said.

"Having said that, we must be aware that it's there and respond to it which is what we're trying to do.

"It would be a foolish person who ignores it or pretends it never happens.

"There's no evidence of activity in rugby, but we must be ready if it happens and I believe we're in a pretty good place to do that."

Ritchie insists provisions had already been established by the RFU to combat spot-fixing before allegations emerged in football.

"We put in place some time ago a rugby integrity unit to address it and that operates in partnership with ourselves, the Rugby Players' Association, Premiership Rugby and the Championship," Ritchie said.

"We've taken advice from consultants who have worked extensively in this area and that's been very good.

"These are people who have been involved in cricket or horse racing because obviously you can learn from other sports."

Meanwhile, Ritchie is confident European competition can be salvaged for next season.

The future of the Heineken Cup is in grave doubt with England's clubs refusing to participate in a competition run by European Rugby Cup and actively pursuing the option of adding Welsh regions to an expanded Aviva Premiership.

Ritchie is convinced there is still a "deal to be done" as he seeks to prevent the disintegration of European rugby that would inevitably accompany the formation of an Anglo-Welsh league.