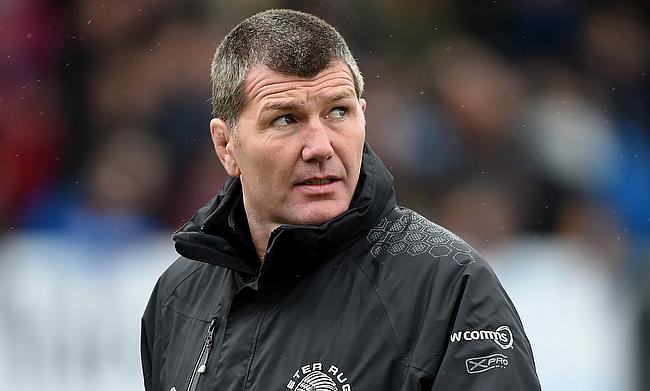 Exeter Chiefs director of rugby Rob Baxter wants his side to guard against complacency despite registering their third consecutive win in the ongoing season of the Heineken Champions Cup.

After starting the European season with a 12-31 win over La Rochelle, Baxter's men also registered victories of 34-18 and 20-22 against Glasgow Warriors and Sale Sharks respectively to occupy the top position in Pool 2.

They now have a six-point lead over second placed Glasgow Warriors and are set to face Sale Sharks again in the upcoming round with another victory set to take them close to the quarter-finals and Baxter wants his side to maintain their winning momentum.

"We've been in good positions in the pool before and let things slide," Baxter told BBC Radio Devon.

"We needed to go to Glasgow in a winner-takes-all game before and came unstuck, so let's make sure we don't let ourselves get in that position again, and we're in control of what we can control now."

During their previous encounter against Sale Sharks last weekend, Exeter had a 13-22 lead by half-time but failed to score a single point in the second half but managed to hold on to a two-point win despite Ben Moon's yellow-card in the 69th minute.

“I’ve told the team to chill out and relax now, but I also told them not to be afraid and to stop and think what was going through their mind going into the game, what they were thinking ahead of the second half, because whatever they were thinking, we didn’t quite get aligned,” Baxter told after the game.

“When we have 15 players aligned, I know we are very good. We lost it a bit today. Fortunately it’s not hurt us too badly, but luckily it hasn’t come back to haunt us either.

“The good thing is we play Sale again next week and there are improvements for us. It’s not like we have thrown the kitchen sink at it. We hung on at the end and we can play better.”