Rob Baxter refuses to criticise referee after defeat to Leinster 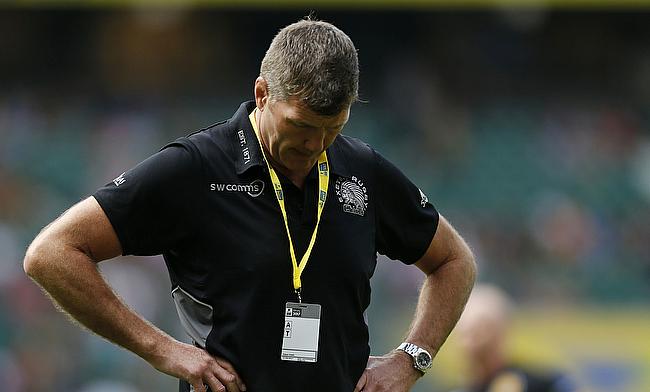 Exeter Chiefs rugby director Rob Baxter played down French referee Romain Poite's decision to not award the side a penalty try during their recent defeat to Leinster at Sandy Park on Sunday.

The Aviva Premiership side's momentum was dented at the start of the second half when Sean Cronin was sin-binned for a try-saving tackle on Jack Nowell on what could have been awarded a penalty try but referee Poite just signalled a penalty to Exeter.

"Often, if you start complaining about a refereeing decision, it probably means you have not been good enough to win a game of rugby, and that is probably how I feel about this match," Baxter said after Exeter's 8-18 defeat.

"I am not going to stand here and complain about officials' calls, because most of the things that were out there were completely in our hands, and that's what we have got to take responsibility for.

"Leinster played better than we did and deserved the scores they got.

"The positive is we can play better than that and we have got another opportunity in six days' time against the same opposition, and that is our challenge.

"Just catching and kicking properly would have made a significant difference. I don't think there was a lack of effort, but we can certainly be a bit better directed in what we do, and we can be a lot more accurate."

This was Exeter's first defeat at home in 12 months and Leinster head coach Leo Cullen admitted it was a "game for the purists".

"It was a closely fought game, a proper cup match between two pretty well organised teams and it is not an easy place to get a win.

"We controlled the ball pretty well in the first 20 minutes and we had some good chances, and we were a bit unlucky not to score.

"We eventually got over and had our noses in front, and there was a big moment on half-time when we held them and their pick-and-go game out.

"The try we gave up on the short side in the second half was a little bit disappointing and I thought we could have managed that better and we just shot out of the defensive line and they got us on the edge.

"But after that try I thought we were quite strong aerially, and we were able to control possession reasonably well, and then we produced 44 phases for Jack Conan's try, which is pleasing, because of how patient we were in their 22."