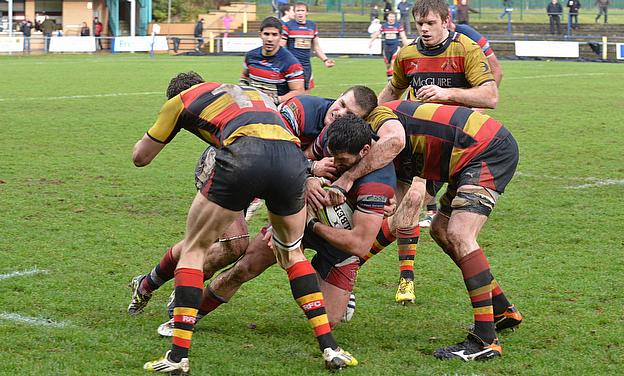 Two early scores gave the visitors an unexpected lead but the hugely experienced and fully professional opposition presented a formidable defensive wall and their pack finally rumbled over in the final minutes to claim their four try bonus. Nevertheless Richmond gave them a searching test and can take plenty of positives from a wholehearted display.

With a number of players returning from injury, Richmond made five changes to the side who beat Hull Ionians in their previous fixture. In particular Jeremy Cunnew and Jamie Thompson returned to the pack and on the bench talisman JP Attlee finally made his season’s debut alongside the promising Charlie Whiteley from the Under 21 squad.

With the imposing Castle Park ground looking in excellent condition, both sides started their warm up on firm turf but a half hour downpour soon put paid to that, the game commencing in monsoon like conditions with thunder rolling. Richmond were quicker to adapt their game and an early Rob Kirby steepler was dropped by the Doncaster full back, the knock on putting his teammates offside. Fly half Kirby made no mistake with his penalty kick.

Handling was difficult for both sides and an early Warren Abrahams break could not be followed up. The visitors looked strong at the set scrum and when they held the ball in the back row, a Doncaster player came unbound too early and Richmond extended their lead to 0-6. For the first quarter of the game, the visitors fully deserved their lead.

As the rain finally relented, Doncaster regained some confidence and control and at last started to play some rugby in the opposition half. Twice they almost scored, once a close call in the corner adjudged out by referee and linesman and once when their winger was well held by the covering Jamie Gibbs. There was an inevitability about the Paul Roberts penalty which followed shortly, probably for offside. After half an hour Doncaster finally took the lead. With the Knights’ runners starting to break tackles, Richmond’s defensive efforts became increasingly stretched and a high tackle set up a penalty kick to the corner from which the forwards drove over at the second attempt. Michael Hills, playing Premiership rugby for London Welsh last season, was the scorer.

If Richmond could have held the score at 8-6 at half time, Doncaster would have come under more pressure from a large but critical crowd but they scored their second try in the final minute of the half. Retaining the ball with great skill and going through phase after phase, the home side pulled the Richmond defence from side to side till fly half Roberts was finally able to saunter through a big hole close to the maul and hand on to supporting lock forward Matt Challinor to touch down by the posts, the conversion making the half time score 15-6.

The Knights came out for the second half in dry shirts and different colours. Their opposition, still clad in wet shirts, gave away an early penalty but Roberts hit a post and the visitors once more raised their game in search of the next score. Pugnacious hooker Jason Phipps seized turnover ball to run thirty metres and the Richmond attack looked full of possibilities until frustratingly penalised for crossing. Kirby hit a post with a long penalty effort and then made full amends with another high up and under, which he followed up with a well timed and crunching tackle to earn another penalty, well converted.

At the kick off Will Warden, in inspirational form, was rudely upended by Doncaster hooker Roberto Santamaria and a yellow card was inevitably flourished. Richmond had their chance. When the pack drove the Knights’ seven forwards backwards and Kirby kicked for the 22, it looked like ‘game on’ but Doncaster hacked clear, their winger getting to the loose ball first and in the following sequence of play Harison Edwards earned a yellow card in his 22 for coming in at the side. Now under pressure Richmond held out for ten minutes but were ultimately undone by a second yellow card. JP Atlee, who had replaced Tom Sergeant ten minutes earlier, got himself illegally positioned in a maul and was despatched for a further ten minutes.

The visitors held on gamely through a succession of tight scrums but the splendidly named Bruno Bravo eventually slid over at an angle for the third try and in the final five minutes the bonus point was secured as the big Doncaster pack mauled their way over from a line out, the vastly experienced Glen Kenworthy, the Knights’ forwards coach, being the try scorer.

Steve Hill Richmond FC Director of Rugby commented; ‘To hold the league leaders and a full professional outfit to within six points for 70 minutes of the match at their home ground speaks volumes about the effort and work rate the Richmond squad produced. The strength of our scrum surprised them as did our defensive work rate. To go two men down was always going to be a huge handicap and ultimately cost us coming away with any points. We need to take the large amount of positives from this performance and use them effectively next week against Henley.’