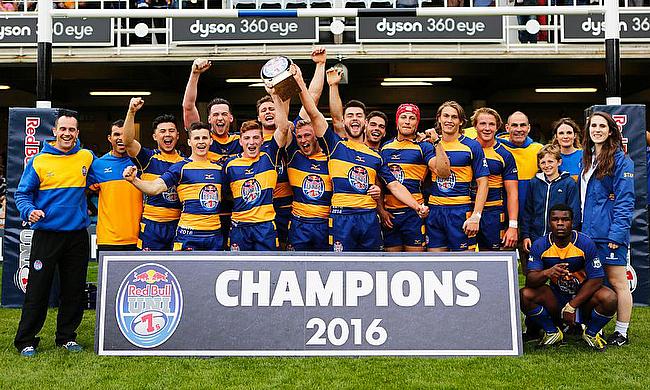 The University of Bath take spoils at #RedBullUni7s
©Red Bull

University of Bath sealed a third title in a row as they beat Cardiff Metropolitan 21-17 in a thrilling final at the Red Bull Uni 7s.

After a gruelling morning of rugby, which saw them play six games in order to qualify for the final, it took until the final play of the game from Bath to seal victory.

The home side were more than used to lifting the trophy, having done so previously in both 2014 and 2015.

The final was played in front of 13,184 spectators during the half-time break of Bath’s Aviva Premiership clash with Worcester Warriors.

Bath found themselves with a 14-0 lead early in the second half, after sensational pace from Levi Davis sent him clear to score his side’s second. However, they were pinned back by one score just before the break, with Wales scoring in the corner.

Two tries in quick succession then saw the Welsh representatives take the lead which they held until the dying seconds, before nifty handling amongst the Bath players set them clear to score beneath the posts and seal victory.

The defending champions went the entire tournament unbeaten on home soil, including a 12-7 win against finalists Wales in a pre-cursor of the final. However, Wales came in to the final full of confidence after they too went unbeaten, up until the final qualifying game against Bath.

Teams from France, Italy, United States of America and Brazil all competed in the competition, after each qualifying from national tournaments earlier in the year.

Brazil were unable to make an impact after losing all six of their games, and it looked like Italy wouldn’t fair much better until they sealed a surprising win against England in their final game. However they suffered the same fate with three to their name.

Big things were expected of the Americans, and they were in contention of qualifying for the final until a 43-14 demolition at the hands of Wales in round five. They realistically ended France’s chances of qualification with a thrilling 24-14 win midway through the qualifying rounds.

France’s poor showing also saw them suffer a shock defeat at the hands of Italy, as they lost out 24-10 in an empty Recreation Ground stadium. The French side returned to Pau with just one win to their name, beating Brazil 19-12 in their final outing.