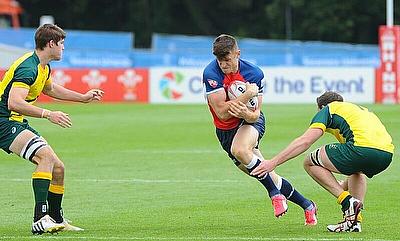 Great Britain's Men's team lost their opening match of the day to Australia, but bounced back against Namibia to reach the finals
©BUCS 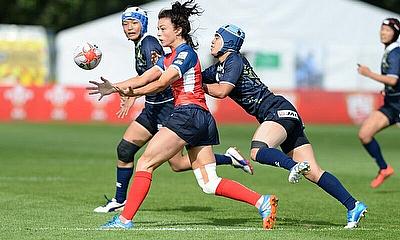 Great Britain's Women's side failed to reach the finals, but responded well in their first play-off game
©BUCA

Great Britain’s Men’s team are through to the World University Sevens Championship semi-finals after ending Day Two with a win and a defeat while the Women’s side lost to Japan and France meaning they missed out on a spot in the last four of their competition.

Team GB’s women dropped into the play-offs, but responded magnificently to the disappointment of not reaching the finals as they beat Spain 33-0 to set-up a 5-6 play-off tie with Italy tomorrow afternoon.

Coming into Day Two of championships, Team GB were full of confidence following two victories yesterday against the Czech Republic and Italy. However, the wind was taken out of their sails slightly as they began their second round of matches with a 19-12 defeat against Australia.

GB’s Jonathan Dawe had cancelled out Tim Anstee’s early score for Australia before Brandon Quinn touched down for the Wallabies midway through the second period to restore their lead.

GB hit back once again this time through Tom James, but it was Australia who had the final say as Adrian De Lore touched down in the corner to seal the win and confirm the Australian Uniroos’ place in the final four.

This was a huge result in the context of the tournament and the Wallabies certainly put down a marker not only for the day, but for the rest of the championships.

Great Britain now knew they had to avoid defeat against Namibia, who thrashed already eliminated Czech Republic 55-5 earlier in the day, in order to qualify for the semi-finals and they did just that.

Tries from captain Sam Pointon, Charles Kingham, Chris Levesley, Samir Khabouch and John Hooper confirmed the win for GB to the delight of the home crowd in Swansea.

Great Britain's Jak Rossiter: "It was a much tougher day for us today with us playing two very good sides in Australia and Namibia. Obviously, the Australia game didn't go to plan, however I don't think that was down to our performance - we just didn't get the rub of the green. Hopefully, we will be able to meet them again in the final.

"The way we played against Namibia showed what we are capable of in a buisness like performance. It was a must win game, but the boys were much more relaxed and let our skills do the talking. It was dissapointing not to top our pool, however it's not the end of the world. It makes no difference to us who we play in the semi-final.

"Now we have France in the next round and we know they are normally very good at these championships. They topped their pool so it's going to be a tough challenge. I think we have to approach the game the same way we did against Namibia. I think they are similar sides so it will be about keeping the ball away from them and being decisive in attack."

For Team GB, their three wins and a defeat in the pool stages means they will now play France on finals day after the Les Bleus qualified top of Pool B following three wins including a 35-5 victory against Argentina in their final match of the day.

Elsewhere, Pool A winners Australia will play Spain in the semi-finals following their victory over GB and a 28-7 win against Italy. The Wallabies head into tomorrow with a 100 per cent record under their belts and they are oozing confidence at just the right time. Spain’s victories over Argentina and Malaysia were enough to see them qualify from Pool B.

Namibia, Italy, Argentina and Malaysia all dropped into the play-offs in the Men’s side of the tournament.

Like the Men’s team, Great Britain Women were in a buoyant mood heading into the middle day of the championships, but they were brought back down to earth after their opening game as they suffered a 21-0 defeat against Japan.

After a slow start to the game by the hosts, Japan capitalised to score just before half-time. GB failed to assert their authority on the game after the break as Japan scored a second before wrapping the points up with a Penalty Try just before the end.

GB’s next opponents were France but Great Britain had one eye on the final Pool A game as their early conquerors, Japan, took on New Zealand. Great Britain knew anything other than a victory for Japan against a winless All Blacks side would open the door for them to swoop in a snatch second place, but despite a positive start by New Zealand, Japan went on to win 29-12.

With that in mind, GB now had to beat France who had begun the day with a commanding 36-0 win over Italy which put them in touching distance of the last four.  However, the journey in the main competition stopped at the pool stages for Team GB as they were beaten 31-5 by the silver medallists of two years ago meaning the hosts went into the play-offs to take on Spain later in the afternoon.

In Pool B, after starting slowly yesterday, the reigning champions Canada flew out of the blocks to earn themselves a 36-0 win over Australia in their opening game of Day Two. This victory also secured their path into the last four.

However, finishing top of the pool wasn’t done and dusted for Canada just yet. The surprise package of the tournament, China, needed to continue impressing on day two in two crucial matches. Firstly, they came up against a Portugal side that had kept their semi-finals hopes alive with a 12-5 victory over Spain earlier in the day, but China fell to their first defeat of the championships as Portugal produced a strong display in a 12-0 win.

This all meant that China had to beat table toppers Canada to progress to the semi-finals and with just a couple of minutes on the clock remaining, it looked like China would grab second spot off Portugal. However, a late try by Canada took the score to 19-17 leaving China in the play-off places.

Elsewhere, it was a good time for Spain to claim their maiden win of the tournament as they grinded out a 14-12 win against Australia to advance into the play-offs and send the Wallabies out of the competition.

Namibia will contest for fifth place tomorrow following a rampant display against Malaysia. Unomassa Kavita scored a brace in the 43-7 win which means they will take on Italy tomorrow. Tries from Pietro Rigutti and Leonardo Subacchi helped the Italians to beat Argentina 19-0 and progress into the final day. They will be hoping to reverse the result in the pool stages when Naimbia beat them 40-12.

Great Britain Women kicked off the first round of play-off matches and did so in style as they thumped Spain 33-0.

Robyn Wilkins opened the scoring after combining well with her Wales team-mate Hannah Jones before Charlotte Holland and Captain Lucy Nye touched down to give GB a comfortable 19-0 lead at the break.

Emily Wood then continued the scoring for the hosts before Abigail Walker and Nye once again, completed the rout. Team GB will now play for fifth place tomorrow against Italy who beat China 19-5 in their play-off match.

China ended the day with three defeats to their name while the Azzurri will be looking for revenge in tomorrow’s contest with Team GB after the hosts beat the Italians 12-0 in the opening game of the tournament.