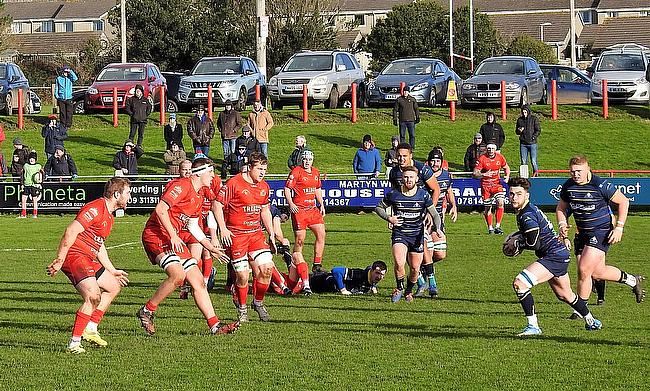 Despite five postponements across the three leagues, the fight for the top spots has a different complexion after another unpredictable weekend of rugby.

Rosslyn Park came through a tough assignment against Caldy to move to the top of National One after securing a 26-20 win at Paton Field.

Just six points separated the sides at the interval, as a penalty try and two penalties from the boot of Ben Jones gave Caldy the lead whilst Benji Marfo crossed for Park.

The visitors then turned the game in their favour with Sam Garvey and Nick Scott going over in quick succession before a fiery last 10 minutes broke out on the Wirral.

Oliver Dawe’s score gave Rosslyn Park a buffer, and they looked to be cruising to the final whistle when Nathan Rushton was sin-binned for Caldy.

The contest then boiled over when Harrison Crowe (Caldy) and Henry Spencer (Rosslyn Park) were yellow-carded, but the punishment for the latter quickly turned into a red card.

Ultimately though, Park had done enough in the second half to secure the win, but the 13-men of Caldy did salvage a losing bonus-point thanks to Mike Barlow’s late try.

Park are now one point clear at the summit after Cinderford slipped to their third defeat in four matches as Sale FC (4th) produced an excellent display to depart Dockham Road with a 19-15 win.

Michael Wilcox’s try inside the first five minutes and a penalty from Reece Boughton had given Cinderford an 8-0 lead, but Sale charged back into the contest.

Callum Ford’s try got the ball rolling, but it was in the second half where Jonathan Keep’s side dominated the scoreboard.

Fergus Mulchrone scythed through the Cinderford defence to touch down on 66 minutes before Tom Walsh darted over to seal a third away victory on the bounce for Sale.

A penalty try did allow the hosts to end the month with a losing bonus point, but Cinderford’s latest setback means they have been knocked off top spot.

Down at the bottom, Tonbridge Juddians halted a seven-match winless run by securing a narrow 12-10 victory against Plymouth Albion in testing weather conditions.

Home fly-half Tom White opened the scoring with a penalty after 10 minutes, but his effort was matched by his opposite number Tom Putt just before half-time.

Two further penalties from White shortly after the break pushed TJs in front, but the visitors hit back with a try by Dan Pullinger-Ham on the 66th minute, which Putt converted.

But it was the boot of White that guided the hosts to victory as a fourth penalty of the afternoon proved to be enough for Peter Dankert’s men to seal their first win since September.

Chinnor’s solid first-half display lifted them to third place in the table as tries from Fred Tuilagi, Caolan Ryan and Will Millett helped the Black and Whites to a 22-5 triumph over Taunton Titans.

Elsewhere, Cambridge saw their seven-match unbeaten run come to an end as Leeds Tykes came from 15-0 down to clinch a 17-15 victory at Granchester Road.

Also in National One, a brace from Jake Hennessey gave Blackheath a 16-6 win against Bishop’s Stortford whilst Rams RFC’s clash with Birmingham Moseley was postponed due to the adverse weather conditions caused by Storm Arwen.

With league leaders Stourbridge not in action after their fixture with Blaydon was postponed, Sedgley Park moved to within one point of their promotion rivals thanks to a 42-14 victory over Chester.

Harrison Vare’s score after only five minutes had put Chester ahead, but tries from Jamie Harrison, Matt Gallagher and Danny Openshaw gave Sedge a 21-7 half-time lead.

After the break, Rhys Henderson’s try increased the visitors’ advantage before Tom Ailes and Ben Black both crossed - either side of Vare’s second - to wrap up a welcome victory for Sedge, who had lost their previous two matches.

The Tigers are now in the silver medal position after Hull’s meeting with Bournville was scuppered by the weather.

And that postponement also allowed Rotherham Titans to surge into third spot after they hammered Loughborough Students 71-5 in the Midlands.

Harry Newborn touched down on four occasions, while Callum Bustin, Harry Dunne and Jamie Cooke weighed in with first-half efforts.

The @SedgleyTigers got back to winning ways at a very cold and windy @RUFCChester in #Nat2N yesterday. RVR caught up with Tigers fly-half Steve Collins who managed 100% kick success even though the posts were moving in the wind! pic.twitter.com/Q0rSUYLFh4

There were also tries for Sam Boxhall, Marcus Payne, Francis Entressengle and Matt Drennan, with Matt Minogue slotting eight of the 11 conversions.

Loughborough’s only response came from winger Will Sanders on 73 minutes, but this was a ruthless Rotherham display and the unbeaten side now sit just four points off the top.

Fylde missed the chance to move up the table as they were edged out 15-14 by Luctonians at Mortimer Park.

Fylde’s Matt Garrod got the Lancashire club off to the perfect start with a score after five minutes, but they trailed at the break following Frank Kelly’s excellent try and a penalty from the boot of Owen Randell.

Luctonians then increased their lead as they were awarded a penalty try, which resulted in Fylde’s Scott Rawlings being shown a yellow card but not long after the away side returned to 15-men, they were also back in the contest.

Charlie Partington crossed the whitewash on the hour, but that was all Fylde could muster up as Lucs held out for a third win on the spin.

With Storm Arwen having a significant impact on fixtures in National Two North, there were only two other games that took place. Huddersfield secured successive victories as they recovered from a slow start to beat Harrogate 25-7 whilst tries from Chris Wearmouth, Ben Blackburn and Alex Ball helped Tynedale to a 24-13 win over Wharfedale.

A Levi Davis converted try was enough to give the away side a 7-5 lead at half-time, with Redruth responding through Richard Brown’s close-range effort.

A penalty from McLean stretched Worthing’s lead after the break, but a lovely score from Kyle Bradley tied the game up at 10-10 at The Recreation Ground.

However, Worthing produced two moments of brilliance to secure the win as Forrest’s weaving run made it 17-10 before a wonderful flowing move was rounded off by McLean three minutes later.

From there, the Raiders held out for the victory which leaves them level on points with Redruth and second-placed Esher.

Speaking of Esher, their clash with Guernsey was postponed after the Channel Islanders’ flight was cancelled due to the adverse weather conditions and as a result, Clifton were able to move into the top four following their 22-19 victory over Canterbury.

The Lavender and Blacks led 19-12 at the break as Bradley Talbot and Finlay Sharp scored either side of Frank Reynolds’ try for Canterbury before Bentley Halpin’s effort put Clifton further ahead.

Dwayne Corcoran kept the City Men in touch, but the next points of this contest didn’t arrive until the 70th minute when Luke Cozens pinged over a penalty for Clifton.

Alex Evans’ score late on did set up a grandstand finish at Station Road, but Matt Salter’s men saw out their third victory in a row to move to within three points of the leading pack.

With the top eight separated by just six points in National Two South, we have decided to focus on Henley Hawks (5th) as they sealed their fifth win from their last six games by beating Dings Crusaders 33-22.

Rory Mason’s try gave the hosts an early advantage and even though Harry Rowson responded for Dings, Henley raced into a 28-point lead before half-time.

Tom Emery, Monty Bradbury, Reuben Norville and Alex Bradley all crossed for converted tries and whilst their exploits in the first period were enough to earn the Hawks the win, the Crusaders hit back to leave Oxfordshire with a bonus point.

Bristol Bears loanee Tom Wilstead darted over before a brace from Tom Price completed the scoring at Dry Leas.

Elsewhere, Leicester Lions leapfrogged Old Albanian into sixth place thanks to Ben Young, who scored all 16 of the Lions’ points in a 16-14 victory over OAs, whilst bottom of the table Westcliff arguably produced their performance of the season but it wasn’t enough against Bury St Edmunds as the Wolfpack secured a 19-7 win on Jacob Ford’s return to The Gables.

Also in Round 12, Barnes ended November unbeaten as Paul O’Dell scored twice to help his side to a 33-8 success against Barnstaple whilst Hinckley made it two wins on the trot after beating Rochford Hundred 22-17, despite having Adam Johnson sent off in the first half.