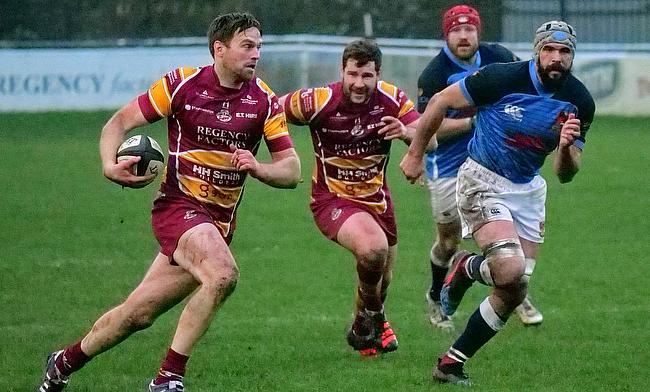 With top of the table clashes dominating Round 11 in the National Leagues, it wasn’t a surprise to see some shake-ups at the summit of each division.

Seb Reynolds’ side trailed 13-8 at the break after two close-ranged scores from George Porter and Nathan Taylor had put Cinderford in front, whilst Ollie Taylor burrowed over for Rams.

The hosts refreshed their pack at the break and their changes were rewarded as the forwards set the platform for Henry Bird to dart over on 43 minutes.

Rams then collected a penalty try to put them nine points ahead, but Taylor’s second of the afternoon set up a tense finish in Berkshire.

However, the home side held on to the win which lifted them to third in the table whilst Cinderford’s lead at the summit has been cut to two points.

Rosslyn Park’s Dan Laventure and Ben Howard scored hat-tricks as Kieran Power’s side thrashed Blackheath 55-14 at The Rock to move to within touching distance of Cinderford.

Both Laventure and Howard produced cutting edge displays as Park ran riot under the Friday night lights in the capital.

Alex Brown touched down for Blackheath to level the scores after 14 minutes before Rosslyn Park took complete control.

5-star performance from the Ravers secures 5 points on the road. Tries from Boges x2, Hearn, JJ and Murray give Caldy a bonus point win away in Somerset.#Ravers pic.twitter.com/GiX5pYVs57

Fred Owen grabbed Club’s only other try of the evening, but the opening match of Round 11 belonged to Park, who have now won their last four games.

With Chinnor staying in fifth-place following a 29-12 victory over Leeds Tykes, Caldy remain hot on their heels as they extended their unbeaten run to eight matches after a 36-31 win against Taunton Titans.

Taunton went 10-0 up after Charlie Wright’s 16th-minute try and a penalty from Iwan Jenkins, and the hosts were still in front at half-time despite a brace from Adam Aigbokhae.

Will Norton and George Gosling both crossed to make it 24-14 to the hosts, but the Titans’ own indiscipline would cost them.

Even though both sides were shown yellow cards on the stroke of half-time, Caldy hit the ground running at the start of the second period as Oliver Hearn and JJ Dickinson touched down.

However, Taunton would be reduced to 14-men again when Sam Leworthy was sent to the bin and the visitors took full advantage of the extra man as Joe Murray scored Caldy’s fifth try.

A Ben Jones penalty made it 36-24 and even though Hallam Chapman crossed late on for Taunton, Caldy had done enough to maintain their superb run of form.

Cambridge also continued their excellent sequence of results as Richie Williams’ charges beat Plymouth Albion 17-0 to make it seven games without defeat for the Blood and Sand.

Elsewhere, Bishop’s Stortford moved three points clear of the bottom three after producing a superb performance to beat Birmingham Moseley 33-3, whilst Warren Seals kicked 18 points as Darlington Mowden Park earned a 30-24 win against Tonbridge Juddians in an ill-disciplined affair at The Slade.

Stourbridge thumped local rivals Bournville 55-22 to secure their 10th win on the bounce as they moved four points clear at the top of National Two North.

The league leaders were ahead 26-15 at half-time with Tobi Wilson opening the scoring, but Bournville were still very much in the contest thanks to tries from Mikey Ho and Owen Williams.

However, Neil Mitchell’s men surged clear after the break, scoring four more tries with Dan Rundle grabbing two across the course of the afternoon whilst Wilson rounded off another successful Saturday for Stour.

Hull are now Stourbridge’s nearest challenges as Gary Pearce’s side moved up to second in the table following a brilliant 22-17 victory over promotion chasers Sedgley Park.

Sedge did make a blistering start to the game at Park Lane with Matt Gallagher and Tom Ailes going over, but Hull responded by scoring 22 unanswered points, with Reece Deane and Charlie Beech crossing the whitewash.

Eight minutes from time, Andy Riley’s try set up a grandstand finale, but Hull held on for arguably their standout victory of the season.

That defeat for Sedgley Park means they have dropped to fourth in the table after Fylde beat Hull Ionians 28-12.

The Lancashire club controlled the scoreboard for most of the first period as Greg Smith’s two penalties were added to by Ben Gregory, who crossed on 32 minutes.

But Hull Ionians roared back either side of half-time as tries from Nathan Hill and Ben Bell cut the deficit to a single point.

However, that gap between the two teams lasted just two minutes as Tom Carleton scored a stunning solo try before another Smith penalty and Adam Lewis’ effort wrapped up the bonus-point win for Fylde, who are now six points behind the leaders.

Rotherham Titans are also in the promotion conversation after Adam Byron’s reign as head coach got off to the perfect start as the Yorkshire outfit beat Tynedale 38-14 at Clifton Lane.

Elsewhere, Loughborough Students recovered from a slow start to see off Harrogate 24-15 and Wharfedale picked up an excellent 20-10 win against Chester at The Avenue.

Redruth notched up a 26-22 win over Canterbury to stay on top of the pile in National Two South, but it was a far from straightforward afternoon for Nigel Hambly’s men.

After tries from Richard Brown and Connor Gilbert gave The Reds a half-time lead, Canterbury nudged themselves in front when Kyan Braithwaite pinged over a penalty.

The City Men had also scored twice through Frank Morgan and Aiden Moss, but it was time for another double from Redruth as Jack Oulton and Richard Kevern touched down to make it 26-15.

Their second-half efforts to wrap up the bonus-point ultimately helped Redruth over the line, whilst Braithwaite’s own converted score made sure Canterbury ended the afternoon with a losing bonus point.

Esher are still level on points with Redruth after eventually running out comfortable 41-21 winners against Old Albanian.

The two sides exchanged a try apiece - through Dan Rowland and Elliott McPhun - before Harvey Scott and Andrew Hamilton put Esher 10 points ahead.

OA’s Alex Nott went over early in the second half, but the Eees then took the game away from their visitors as Chris Davies and Harri Lang touched down before Sam Morely landed a penalty.

Hinckley snatched the victory in the 78th minute @WorthingRFC on Saturday - Toby Baldwin grabbed the late try with @Adam_johnson2 and Alex Salt also scoring with 13 points from @Mr_Joe_Wilson - these are the @Natleague_rugby highlights #n2s pic.twitter.com/2YxYvcdAGA

Alessandro Ricci did cross for a converted score on 68 minutes, but Jack Lavin’s incept try sealed the deal for the hosts.

Worthing Raiders’ own promotion aspirations were dented once again in Round 11 as Toby Baldwin’s late, converted try saw Hinckley claim a 28-26 win at Roundstone Lane.

A brace from Levi Davis, either side of two Joe Wilson penalties, gave Worthing a healthy lead which was then extended when Nathan Jibulu crossed to make it 19-6.

However, Hinckley’s revival began on the stroke of half-time when Adam Johnson dotted down and the hooker’s second try on 47 minutes gave the Hornets the lead.

Jack Forrest’s effort put the Raiders back in front, but the final 10 minutes saw Hinckley turn the match in their favour.

Wilson’s third penalty of the afternoon reduced the arrears before Baldwin’s try four minutes from time sealed a tremendous victory for the Midlands club.

Guernsey Raiders (4th) are six points off the top as they thrashed an injury-hit Westcliff 60-5 at Footes Lane whilst Luke Cozens guided Clifton (5th) to a hard-fought 33-25 win over Bury St Edmunds.

Elsewhere, Leicester Lions battled to a 17-14 triumph over a stubborn Barnstaple outfit, Henley made it four victories from their last five games as a scintillating first-half display helped them to a 37-15 win over Rochford Hundred and Thomas Knight’s last gasp try secured a 21-21 draw for Dings Crusaders against Barnes.