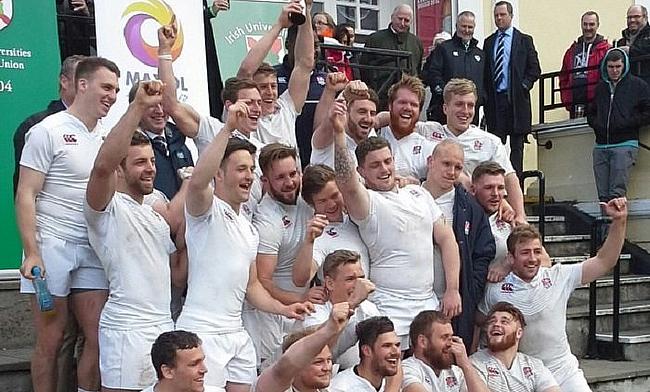 England Students certainly had an exciting and constructive couple of weeks in their latest round of fixtures when they made the trips to France and Ireland.

A narrow defeat to France and a comprehensive win over Ireland ensured that there were more highs then lows to take out of England’s most recent tour and after an impressive season of domestic university rugby in the BUCS leagues, the future once again looks bright for the England Students set-up.

England Students pulled together a 30-man training squad before the BUCS Championship Finals on March 23rd where finalists Exeter and Loughborough sent a combined total of 10 players to join up with the squad.

The squad was then whittled down to 24 for their first game against France, but it wasn’t the result the squad were hoping for as they were edged out 30-27 by Les Bleus in a very competitive game.

France led 10-6 at half-time with England’s points coming from the boot of Loughborough’s Tom James before Thomas Jolmes powered his way over for the hosts with 10 minutes left of the first half.

Both sides exchanged tries after the break with Cardiff Met winger James Beale darting over for England before captain and Durham University player Buchan Richardson levelled the scores up at 20-20 heading into the final quarter of the match.

England were then reduced to 14 men and France capitalised on the extra player to re-take the lead on 71 minutes before nudging over a penalty three minutes from time.

However, England never gave in and had the final say on proceedings when replacement Simon Uzokwe of Sunderland University touched down, but it was too little too late.

There were certainly positives to take from the France defeat, but their focus now turned to Dublin and Ireland. England were forced into making two changing to their original 30-man squad as Leeds Beckett’s Liam Edwards (who started the game in Blois) and Luke Peters both had to withdraw from the side due to injury.

Their replacements came from the north-east as Durham’s Sam Moncur and Newcastle’s Will Eversfield were called-up. From there, all attention was now on Ireland.

England trained with National One side Rosslyn Park before using the facilities at The Lensbury in Middlesex to continue their preparation. The squad then made their way over to Dublin on the Wednesday before the game.

The squad was announced the next day which included six changes to the side beaten by France. The coaching staff brought in five new starters and moved Tom James from scrum half to right wing. Sam Waltier (Exeter) came in at scrum half and Paul Davis (Exeter) replaced Rupert Freestone (UWE) at hooker.

The build-up then continued for England which included having to use a pie (yes a pie) as a rugby ball to train with on a park in Dublin as no ball games were allowed! That didn’t seem to affect them though as they dominated proceedings at Trinity College as they beat Ireland 57-30 to end this specific tour on a high.

England led 24-13 at the break thanks to tries from Hartpury College’s Tom MacDonald, Exeter’s Tom Lawday and skipper Buchan Richardson after Liam Bourke had given Ireland and early lead.

The hosts flew out of the blocks in the second period when Max McFarland crossed the whitewash eight minutes after the interval, but England instantly regained control on the contest.

Lawday scored his second before Loughborough duo Tom James and Josh Sharp both got on the scoresheet with Sharp dotting down twice.

Ireland did respond with two more tries of their own, but it wasn’t enough for them to challenge once again as Moncur put the icing on the cake on his debut with England’s final try.

It was the perfect end to the tour for England and it was also a nice way for Manager Phillip Llewellyn to finish his duties with the England Students set-up.  All in all, it was a very positive tour for the Students after an enthralling BUCS campaign.

The next University rugby action comes in just under a week’s time at Leeds as the BUCS Rugby Sevens tournaments get underway starting with the Trophy Competition.