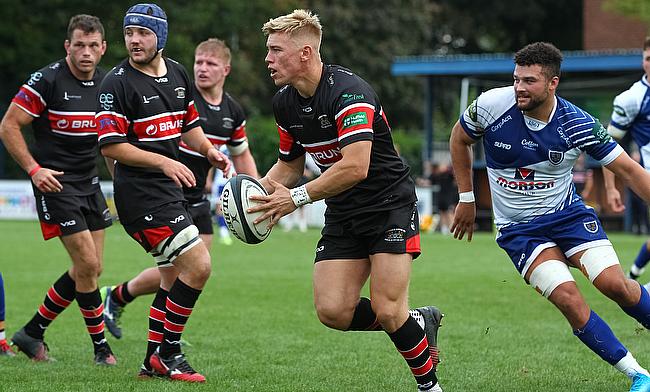 National Leagues out to deliver once again in Round Seven
Cinderford and Sedge hit the front whilst Redruth keep pressure on
National Leagues: Heavyweight clashes steal the spotlight in Round Six
Park take top spot, Titans are singing in the rain and Bonds gives Reds a license to thrill

The competitiveness of the National Leagues was on full show in Round Seven with tight scorelines and some scintillating rugby a common theme throughout the weekend.

Cinderford secured a 50-12 bonus-point win over Leeds Tykes to extend their winning run to seven matches.

The National One league leaders, who sit four points clear at the summit, were actually 12-0 down inside just five minutes as Harry Jukes and Charlie Venables crossed.

However, Joe Dancer’s try and 10 points from fly-half Reece Boughton gave Cinderford a slender advantage at the break.

The hosts then put their foot on the accelerator as Michael Wilcox, Liam Hemming, Will Baldwin, George Boulton and Will Hendy all went over to seal another victory for the table toppers.

Our attention now turns to the bottom of the division as Plymouth Albion secured their first victory of the season by beating Birmingham Moseley 34-12 at Brickfields.

Tom Putt was the star of the show for Albion as he ran over twice and slotted 14 points from the tee. Will Gibson and Dan Pullinger-Ham also crossed the whitewash for the hosts.

Moseley’s tries came in the second half via Tom Benjamin and Gregory Fisilau, but this was a result which Plymouth will hope can kick-start their campaign.

In National One’s featured game of the weekend, Sam Evans’ late penalty was ultimately the difference as Blackheath narrowly edged out Tonbridge Juddians 23-21 at The Slade.

Thanks again to @Miller60892906 for capturing the action ?? pic.twitter.com/NAI8wiU9ji

TJs led 8-0 after an opening score from scrum-half Matt Walsh and a penalty from Tom White before Murray Galbraith-Lowe’s try gave the hosts a 15-3 interval lead.

But two yellow cards shown to Kieran Sassone and Tom Nicoll in a seven-minute window allowed Blackheath to get themselves back into the contest.

Tries from Harry Fry and Jake Lloyd levelled the game and even though White landed another penalty for the home side, Club took the lead for the first time when Lloyd grabbed his second score on 71 minutes.

White’s third three-pointer of the afternoon gave TJs the advantage, but his opposite number Evans stole the win for Blackheath.

Elsewhere in National One, Rams RFC and Rosslyn Park continue to hunt down Cinderford as both sides secured tight victories.

Robbie Stapley’s effort seven minutes from time proved to be enough for Rams to sneak a 21-19 win away at Bishop’s Stortford. The hosts could have snatched the four points right at the death, but Dan Cole’s penalty was off target.

As for Park, they defeated Sale FC 20-15 at the Rock. Kieran Power’s men were 17-0 up just before half-time and despite an excellent fightback from the North West outfit, the hosts were able to hold on to the win.

Meanwhile, Chinnor remain fourth despite losing 23-20 to Darlington Mowden Park - who have now won two games on the spin - and it was honours even at Volac Park as a late Nick Royle try salvaged a 22-22 draw for Caldy at Cambridge.

The hosts led 30-3 at the break, with Gallagher (2) and Andy Riley crossing for tries whilst the impressive Steve Collins kicked 15 points.

A further try from Ollie Glasse gave the home side even more breathing space before Fylde finally sparked into life.

Unsurprisingly, Tom Carleton led the fightback with a superb solo effort before Tom Grimes capitalised on some Sedge ill-discipline to score his first.

Grimes latched on to a loose ball for his second try ten minutes from time, but it was too little, too late as Sedge marched on.

Second-placed Rotherham Titans continue to mirror the form of the league leaders and there was also symmetry in their scoreline as they beat Luctonians 37-22.

Tries from Callum Bustin, Theodore Nwoshu-Hope and David Clarke gave the Titans a 19-8 half-time lead, with Owien Harriott-Davis touching down for the away side.

Bustin and Matt Williams crossed the line for Rotherham in the second half while Lloyd Hayes landed two penalties to seal the win for the Yorkshire outfit.

?? The National League Rugby Review Show: Round 7@Old_AlbanianRFC’s victory at Clifton is our key game on this weekend’s show so tune in now to see the best of the action with @WMuggleton.

James Wheeler and Connor Deigan did go over for Luctonians, but despite their best efforts to stay in the contest, they could never claw Rotherham back at Clifton Lane.

A superb start to the season for third-placed Hull continued in Round Seven thanks to a 27-7 win over Huddersfield at Lockwood Park.

It is now five victories in a row for Gary Pearce’s men, who led 12-0 at half-time as Ali Thomson and Mike Adlard both went over.

A Stephen Johnson penalty and Mike Jobling’s score kept the visitors in complete control of this contest.

And even when Arthur Wilkinson got Huddersfield’s first points of the afternoon on 76 minutes, Hull still had the final say as Alex Cullen’s try provided the icing on the cake.

Stourbridge maintained their perfect beginning to the campaign as they made it six wins out of six after beating Harrogate 46-22. Back-row forward Kofi Cripps scored two of Stour’s eight tries in Yorkshire.

Elsewhere, Tom Davidson’s late penalty saw Wharfedale secure a 14-14 draw with Hull Ionians, Loughborough Students defeated Chester 42-28 in a contest which saw four yellow-cards dished out and Blaydon sealed their first win of the term as they held on to beat Bournville 27-26 in a nail-biting encounter.

National Two South leaders Worthing Raiders secured their fourth win on the bounce as they thrashed Barnstaple 53-21 at Roundstone Lane.

Bryn-Lee Jago crossed for Barnstaple and it was first blood to the visitors after the break when Matt Gohl touched down, but the Raiders quickly responded through Nathan Jibulu and McLean.

George Snell’s effort certainly kept Barum in the hunt for a try bonus-point, but they left Sussex empty-handed as Makeen Alikhan and Jibulu wrapped up the victory for Worthing.

Redruth remain three points behind the Raiders after the second-placed side hammered Westcliff 57-7 at The Gables.

Full-back Will Trewin scored two tries for Redruth, who racked up 50 unanswered points in this contest.

Scores from Sam Stevens, Craig Williams, Richard Brown, Trewin and Steele Barker gave the Reds a 31-0 lead at the interval and they continued to be rampant after the break.

Dean Bonds, Trewin and Jack Oulton added further tries before Westcliff’s respite came in the form of a Seyi Ajeigbe effort on 70 minutes.

However, there was still time for Redruth to inflict more damage on their hosts as Kyle Bradley crossed for their ninth try of the afternoon and their sixth successive victory of the term.

It was a little less one-sided in The National League Rugby Review Show’s key game of the weekend as a converted Dan Watt try two minutes from time snatched a dramatic 33-32 win for Old Albanian against Clifton.

In truth, the match was in the balance throughout so it wasn’t a surprise to see the contest level at the break. Morgan Thompson and Chris West (2) went over for OA’s, but Zakaria Hamid, Ricardo Cano and Bentley Halpin replied for the hosts after they had trailed 12-0.

However with time running out, Watt grabbed his brace and Thompson held his nerve from the tee to seal the win for OAs.

Guernsey Raiders’ outstanding return to the fourth tier continued with a 17-16 victory over Henley Hawks. Daniel Rice’s late penalty, to add to two Tom Ceillam scores, secured a sixth win on the bounce for the Islanders.

A blistering first-half display helped Bury St Edmunds to a 63-25 triumph over Barnes, who had Jasper Cameron sent off, whilst Rochford Hundred secured back-to-back victories as they beat Dings Crusaders 22-17.

And a thrilling weekend in National Two South was punctuated in style as two tries in the final two minutes from Aiden Moss and Frank Reynolds saw Canterbury clinch a remarkable 30-27 win against Leicester Lions.

For all the best action from Round Seven, subscribe to The National League Rugby Review Show…