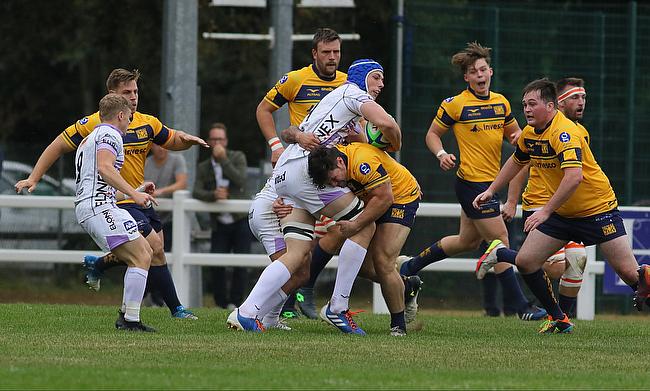 Cinderford and Sedge hit the front whilst Redruth keep pressure on
National Leagues: Heavyweight clashes steal the spotlight in Round Six
Park take top spot, Titans are singing in the rain and Bonds gives Reds a license to thrill
Rams roar into October, title credentials in spotlight at Rotherham and Redruth out to maintain winning start

Cinderford will be looking to extend their unbeaten run to seven matches this weekend after The Foresters moved to the summit of National One in Round Six. Their 36-12 win over Plymouth Albion was a hard-fought one, but with fellow title rivals Rams RFC and Rosslyn Park facing off, it allowed Paul Morris’ side to jump to the top after making it six wins from six.

Their next assignment comes against Leeds Tykes, who have won just one match so far this season. Phil Davies’ team, who currently sit 14th, weren’t in action last week so perhaps they used their time to focus on their development as the Yorkshire outfit continue to adjust to life in the third tier.

Second-placed Rams are just three points behind the aforementioned Cinderford, but our eyes have wandered to the team occupying the bronze medal position. Rosslyn Park saw their winning start to the season come to an end last weekend, so they will be keen to bounce back immediately when they welcome Sale FC to the Rock on Saturday.

The North West outfit (5th) have been an impressive proposition in recent weeks. Three successive wins against Plymouth Albion, Leeds Tykes and Taunton Titans should give Jonathan Keep’s side the confidence to go to the capital and come away with a result. One thing to note is all of the victories we have just mentioned were on Sale’s own patch, so can they translate that form onto the road?

Smith x Cokanasiga has a great ring to it ??

Catch up on all the action from Round 6?? by subscribing to The National League Rugby Review Show ??https://t.co/nRgehxuxxx pic.twitter.com/g7htEPB6yb

From the top to the bottom we go for our featured National One game and Blackheath will hope they can begin to turn their narrow losses into victories as swiftly as possible. Club enter this weekend having lost their last three matches by a combined total of 14 points and they did lead their latest fixture with Cambridge for nearly an hour of the contest.

With this in mind, they will be keen to find their sharpness when they visit Tonbridge Juddians for a first-ever league meeting between the sides. In Round Six, Peter Dankert’s men proved they would be no pushovers in their maiden season in National One despite losing to Birmingham Moseley but with TJs and Blackheath not tasting victory since September 18th, who will come out on top at The Slade?

Also in National One this weekend, Rams RFC travel to Bishop’s Stortford as they look to keep the pressure on league leaders Cinderford whilst fourth-placed Chinnor take on Darlington Mowden Park, who secured their first victory of the season last time out.

Unsurprisingly, Sedgley Park versus Fylde is our featured game in National Two North and this carries the same weight as the recent title-shaping fixtures we have already witnessed this term. It is first hosting fourth and currently in top spot are Sedge, who maintained their unbeaten start to the campaign by eventually romping to a 66-16 win over Blaydon last time out.

As for Fylde, they head into this intriguing match-up on the back of a comfortable victory against Wharfedale and the superb Tom Carleton was at the heart of everything that the Lancashire club did well in Round Six. No two teams have scored more points than Sedge and Fylde in this division so far so expect an entertaining contest from start to finish at Park Lane.

Keeping the league leaders on their toes are Rotherham Titans, who enter Round Seven level on points with Sedge. In fact, only four points separate the top six in National Two North so even at this early stage, there is little room for error if you want to be in the promotion picture when April arrives.

Having come away from recent matches against Fylde and Hull Ionians with victories, the Yorkshire outfit have put themselves in a strong position to challenge for the title and Martin Jenkinson’s unbeaten charges host Luctonians on Saturday. The visitors to Clifton Lane were not in action last time out as their clash with Harrogate was postponed due to Covid-19 reasons, so they will be looking to build on their first victory of the season which they achieved in Round Five away to Huddersfield

"Other sides are coming at us all guns blazing"@RotherhamRugby Director of Rugby Martin Jenkinson tells The Sports Academy about the target on their back as the Titans make an unbeaten start in National 2 North.https://t.co/7xaFlcYpVV

Speaking of Huddersfield, they welcome an in-form Hull to Lockwood Park this weekend with Gary Pearce’s men currently oozing confidence. The Chanterlands Avenue outfit have been the surprise package in National Two North having won five of their six matches to date - their latest being an impressive 26-19 victory over Loughborough Students.

Hull have also only conceded an average of 11.1 points per game so far this term, so Huddersfield will be hoping to unlock their defence on Saturday. In Round Six, Gareth Lewis’ side were well beaten by Stourbridge, but they did manage to claw back a try-bonus point in the second period. The Field boss knows his side need to make improvements and securing a first home win of the campaign would undoubtedly be a step forward for the Yorkshire club.

Elsewhere across National Two North, Stourbridge - who have won all five of their matches this season - take their winning record to Harrogate whilst sixth-placed Hull Ionians travel to Wharfedale.

Also in Round Seven, Bournville host Blaydon - with the visitors still searching for their first win of the campaign - and Loughborough Students welcome Chester. Sheffield Tigers v Tynedale has been postponed because Tyne have a player with Covid who had close contact with a significant number of the squad.

It is almost a month since Worthing Raiders last tasted defeat, and since their only loss of the season, the Sussex club have continued to go about their business competently. Rene Draude’s side have won their last three matches and they continue to keep their title rivals at bay.

Whilst the Raiders will be looking to build on their excellent start to the season, Saturday’s opponents - Barnstaple - are without a victory since September 11th. However, in their last two outings, the Chiefs have shown some green shoots of recovery in defeat against Bury St Edmunds and Canterbury, but Barum will have to be at their very best to topple the league leaders this weekend.

The same can be said for Westcliff, who entertain second-placed Redruth on Saturday, but let’s begin with the away side. The Reds come into Round Seven after an outstanding 49-12 victory over Clifton and they have won all five of their fixtures so far this season. They are also just three points behind Worthing with a game in hand so Nigel Hambly’s men have manoeuvred themselves into a solid position over the last few weeks.

In contrast, Westcliff are struggling. Without a win from their opening six games and with a significant number of injuries, Rick Compton and his staff need to find a spark from somewhere to ignite their National Two South campaign. Last time out, they shipped 66 points against Hinckley so could they upset the odds and record the most surprising result of the season so far?

?? See you from 6pm on Sunday for all the biggest moments from the weekend!

The National League Rugby Review Show’s Key Game in Round Seven comes from Station Road as Clifton take on Old Albanian. The hosts will be looking to recapture their early season form as defeats against Henley Hawks and Redruth - either side of their win over Hinckley - have slowed their progress.

As for OA’s, they too find themselves in a similar place. James Osborn’s side flew out of the blocks, but three successive losses have given the club’s form some unwanted symmetry heading into Round Seven. Granted, Old Albanian have played Worthing and Redruth in recent weeks and with another possible promotion candidate to come this weekend, this will be a stern test for the Hertfordshire outfit.

Meanwhile in National Two South, Guernsey Raiders’ eye-catching return to the division continues against Henley Hawks, whilst fifth-placed Esher will be itching to end a three-game winless run when they host Hinckley.

For all the best action from Round Seven, subscribe to The National League Rugby Review Show…