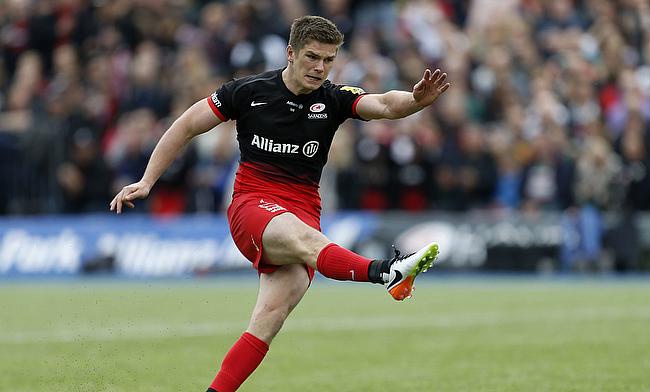 A late fightback from Toulon ended in vain as the Saracens kick started their title defence with a 23 - 31 win in the European Champions Cup game at Stade Mayol on Saturday.

The game also saw a successful comeback from England international Owen Farrell as he scored four penalties and two conversions. After Farrell and his counterpart Leigh Halfpenny exchanged penalties, wing Sean Maitland crossed over to score the opening try for the Sarries.

Another five minutes later, scrum-half Richard Wigglesworth went past the try line while Farrell's conversion and a penalty following that took Sarries to a 3-18 lead in the first quarter.

Even though, Halfpenny's second penalty raised a bit of hope for Toulon, wing Chris Wyles signed off at half-time with the third try in the game leading Mark McCall's men to a 19-point lead.

The second half saw an improved performance from the home side as prop Levan Chilachava and Springboks star Bryan Habana scored tries following Halfpenny and Farrell's respective penalties at the start.

The double try came from Toulon after England international Maro Itoje was sin-binned in the 57th minute. The gap was down to five points at that stage.

Toulon had a great opportunity when Schalk Burger was yellow carded in the 71st minute, but they failed to capitalise on it while Farrell ended the game with a successful kick leading Saracens to a 23 - 31 win. The win has taken Saracens to the second position in Pool 3 behind Scarlets.