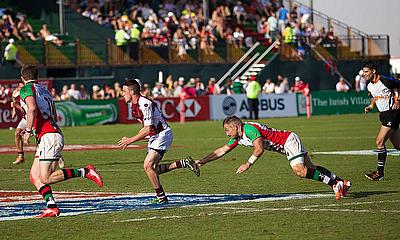 The Dubai Sevens may be famous in international rugby circles as one the 7s tournaments to go to. This year again the Dubai series serves to start off the 7s rugby season riding high on the success of the Olympics.

The Dubai Sevens and the World Series organisers know this and will be looking to make this year’s event bigger than ever.

Behind the world series scenes and for the Gulf Rugby players, this is the time of year when everyone from Syria to Saudi; Muscat and Iran all meet up for their annual reunion. The 9 pitches of The Sevens Stadium are in use from around 10 am on Thursday to gone 6 on Saturday. Every 20 minutes, one team off, another team on.

While the TV cameras are focusing on the action on pitch 1, there is often a smorgasbord of International capped rugby players battling it out on the outer playing fields. Last year Joining Jack, with no less a water carrier then Owen Farrell were taking on the J9 side, combining about 400 caps in one 14-minute game.

Most years, for the local players, there is often a complete disconnect from the International scene. Not borne from disinterest, just time and logistics. A first round sevens schedule will necessitate a morning, lunch time and late night game, all in 30 degree heat and if it’s a vets team, all with the assisting lubrication of a few green cans of liquid. Under those circumstances its; play and find some shade. Not to mention the chances of finding a seat in the stands is pretty thin.

The hills surrounding pitch 2 have now become the locals central point and with most Gulf finals now on that pitch, a sense of the old days of having your moment in the limelight have returned. It is not quite 20000 people on the main pitch, but a sevens final still holds its golden attraction.

Now once again the tournament is around the corner and local radio and magazines are already starting the buzz. It is almost the region’s sporting Christmas, with sevens chat and anticipation getting earlier and earlier.

Are we looking forward to it? After being to more than 20, somehow you just cannot help yourself. Check out Gulf Rugby Paper for more info!