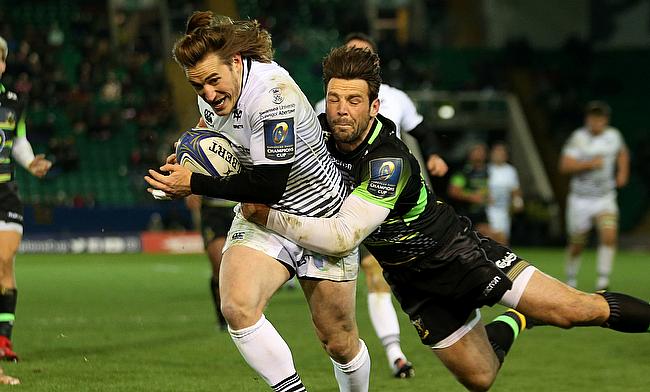 Northampton Saints suffered their ninth defeat in 10 games spread across all the competitions after they were beaten 32-43 by Ospreys in the latest round of European Champions Cup at Franklin's Gardens on Saturday.

Northampton Saints suffered an early setback in the game when Piers Francis left the field with a head injury in the 8th minute and Stephen Myler took over the kicking responsibility. He soon kicked his first penalty eight minutes later to take the Saints to 3-0 lead.

Ospreys wing Hassler did not have an auspicious start as he was sin-binned in the 17th minute but despite being down to 14-men Sam Davies kicked a three-pointer to level the scores.

Northampton then lost a second fly-half to injury, with Myler forced off and Mallinder moving from full-back to 10, and things got worse when Ospreys put together a tidy move that was finished by full-back Evans.

The dominance from Ospreys continued as Tom Habberfield crossed over at the stroke of half time and the Welsh regional side headed into the break with a 14 point lead.

Any chances of a Northampton coming back into the game was put off as Ospreys' dominance continued in the second half as well with Hassler (45 and 59), Kieron Fonotia (48') and Evans (55') scored tries in the third quarter during which the home side's response came only from Dylan Hartley, who went past the line in the 52nd minute.

Mallinder and Ospreys replacement Rob McCusker were sin-binned for their part in a brawl that followed the try, meaning Northampton had to hand the conversion to scrum-half Cobus Reinach, who hit the post.

Ospreys were reduced to 13 men before the end as Dirksen was red carded for a horrible high tackle on Juan Pablo Estelles, but the Welsh side saw the game out to deny Northampton a losing bonus point.