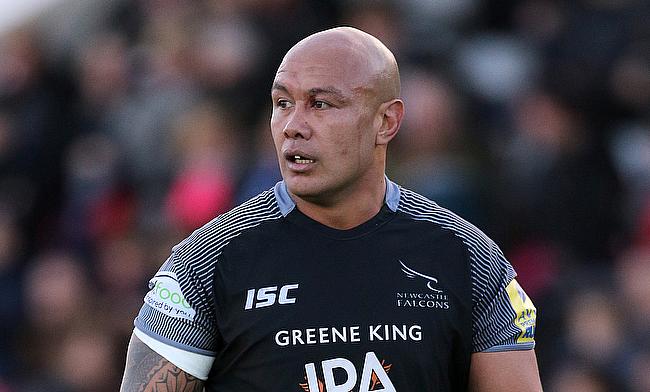 Nili Latu starred with a last minute try while Tane Takulua slotted the conversion as Newcastle Falcons brought an end to their four-match losing streak in the Aviva Premiership with a 22-24 triumph over Northampton Saints at Franklin's Gardens on Friday.

The win has taken Newcastle Falcons to the seventh position in the table while the Saints are down to ninth following their fifth consecutive defeat in this season of the Aviva Premiership.

Northampton thought they had scored after just 13 seconds, but Rob Horne's effort was ruled out as a knock-on by Ben Foden was spotted by the TMO.

The deadlock was finally broken when Northampton kicked a penalty to the corner and the move paid-off as Harry Mallinder crossed over in the 20th minute but fly-half James Grayson missed out on the conversion.

However, the visitors bounced back through back to back tries from winger Sinoti Sinoti and centre Josh Matavesi in the 24th and 29th minutes respectively and with Toby Flood adding conversions on both the occasions they took their lead to nine points.

Just as the Falcons were having the momentum, they suffered a major setback when Flood was sin-binned in the 33rd minute for collapsing a maul that resulted in a penalty try for Northampton Saints, who ended the first half with a two point trail.

After the restart, Northampton thought they had scored once again but TMO suggested otherwise with Dylan Hartley coming agonisingly close.

A 51st penalty from Flood increased Newcastle's lead to five points but skipper Hartley led Northampton's fightback with a touchdown in the 59th minute and a conversion followed by a penalty from replacement Piers Francis meant the home side had a 22-17 lead heading into the final 10 minutes.

Just when it looked all over for Dean Richard's men, Latu went past the line in the 79th minute to help them level the scores and Takulua managed to hold on to his nerve to kick the extras that helped them complete a two point win.