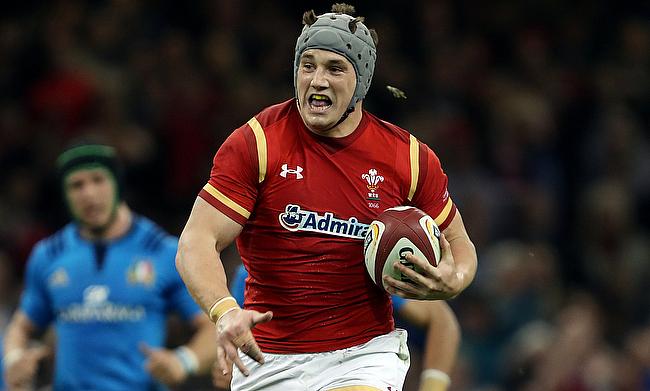 Five tries from New Zealand were too much to handle for Wales as they succumbed to a 36-22 defeat in the second Test in Wellington on Saturday thereby conceding the series 2-0 to the All Blacks.

The tempo between the two sides alike the first Test, was ferocious early on.

A terrific tackle from Wales centre Jamie Roberts on All Blacks centre Malakai Fekitoa earned a crucial early turnover for the visitors. The tackle resulted in forehead injuries for both the players as Fekitoa had to leave the field for injury assessment. Seta Tamanivalu replaced Fekitoa.

In the first 10 minutes, possession mostly remained with Wales who were held back nicely by All Blacks defence 10m inside their own half.

A few minutes on, some brilliant acceleration from hooker Dan Coles allowed All Blacks to enter Wales territory and push forward for the very first time in the game.

Fekitoa returned back on the field in the 15th minute as Tamanivalu was taken off. At the very subsequent minute, Wales struck first with a terrific penalty kick from fly-half Dan Biggar.

The All Blacks were quick to counter attack the visitors as wing Waisake Naholo brought them swiftly inside Wales 22 with some brilliant running.

The home-side took a bold decision on the 19th minute to opt for the corner instead of equalizing the scoreline with a penalty. The lineout ensued a driving maul as scrum-half Aaron Smith fed the ball off the back to Fekitoa who expertly delayed the pass to pull the Wales defenders out of the line and allow fullback Israel Dagg to score an easy try.

Fly-half Aaron Cruden successfully slotted the conversion as the All Blacks took a four-point lead with halfway into the first-half. A penalty opportunity in the 30th minute was converted into nicely into three points by Cruden as the scoreline read 10-3.

It was a very physical first-half with both sides throwing themselves at each other. Another casualty ensued as Cruden sustained a neck injury which forced him off the field. Beauden Barrett replaced Cruden whose game looked all but over at the very moment he was prone on the turf.

With five minutes left for the half-time whistle, an obstruction from Fekitoa resulted in a penalty for Wales. However, the visitors tried to emulate the All Blacks as Biggar slotted it into the corner.

However, things did not go as expected for Wales as New Zealand defence shoved the driving maul into the touch.
Another opportunity walked over to the visitors as centre Jonathan Davies with a huge burst through the centre of the All Blacks defence created a terrific angle, lifted his head and floated the ball up to lock Alun Wyn Jones who unopposed went on to score the touch down.

As the clock turned red, Biggar added the extras to equalize the scoreline. Reports coming in at the start of the second-half suggested that Cruden was on his way to the hospital for additional scans.

Physicality continued in the second half as Naholo made a dangerous tackle at Wales wing Liam Williams. Match referee Jaco Peyper after a consultation with the TMO concluded that the tackle was unintentional and gave a penalty to Wales.

However, Wales threw away the opportunity with a forward throw in the lineout handing All Blacks a scrum.
A quick span of passes and play saw possession changing between the teams for quite a while before Wales flanker Sam Warburton intercepted a pass and sneaked through All Blacks defence. He offloaded it to number eight Taulupe Faletau who failed to grab it as Wales lost another opportunity.

Finally in the 52nd minute the All Blacks converted an opportunity in a try as wing Ben Smith scored a touch down resulting from some amazing work from Barrett in the first-phase of the attack from a Wales lineout.

Barrett landed the conversion as New Zealand took a seven-point lead with 27 minutes left on the clock.

Before Wales could recover from Smith's try, Barrett made it two-in-two minutes for the All Blacks. Wales creaked under the scrum as the All Blacks scrum-half shuffled inside and fed it to Barrett who went on to score the touch down.

The fly-half added the extras as the scoreline displayed 24-10 after 56 minutes into the game.

The home side almost scored another try for their side as Barrett chipped a pass to Smith who volleyed it to Ardie Savea, who failed to collect the ball.

However, the All Blacks made-up for the lost opportunity as they completely dominated the scrum before number eight Kieran Read and scrum-half Smith combined to put Naholo across the try-line unopposed in the left corner on the 60th minute.

Wales made a series of changes to bring in fresh legs to counter the 19-point deficit.

However, the All Blacks showed no mercy to the visitors as Savea went on to score another try in the 66th minute. A poor kick from centre Ryan Crotty somehow managed to find Tamanivalu who gave it inside to Naholo who fed it to Coles. A wonderful offload by the hooker found the replacement flanker who had too much pace over Wales fullback Rhys Patchell.

Barrett landed the conversion as the scoreline read 36-10 with the home side taking a unassailable 26-point lead.
In the 73rd minute, Williams bagged a comeback try for Wales as they displayed exemplary fighting spirit, refusing to simply lie-down. The wing picked a perfect angle to carve his way through the back line and beat Dagg in a foot race.

Biggar landed the conversion as the deficit was reduced down to 19 points.

Wales continued the late flourish as Davies went on to score another try in the 76th minute. Roberts charged down to collect a poor kick from Tamanivalu, and gallop clear. The centre offloaded it to replacement fly-half Rhys Priestland who passed it to Davies.

The deficit was further reduced down to 12 points with three minutes left on the clock.

However, the All Blacks did well to finish strong as Crotty made his way down the right to touch down in the corner only for the TMO to find his boot was just in touch.

The All Blacks produced a strong second-half performance, however, the score-line similar to the first Test, does not tell the Wales' tale of the match. Gatland's men put up an impressive performance and went toe-to-toe with the All Blacks for first 50 minutes before being torpedoed.

Warburton and his side deserve accolades for the way they finished the game despite it proving too little and too late.