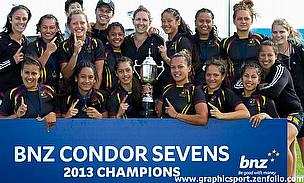 Secondary schools around New Zealand will this weekend begin their campaigns to qualify for the BNZ Condor Sevens finals in November.

Waikato, North Harbour, Poverty Bay, Tasman and Otago will stage regional qualifiers to identify the best teams to go through.

The 28th edition of the national secondary school tournament will be held at Kelston BHS (Auckland) on 29th and 30th November.

Reigning national champions Hamilton GHS are one of the 20 teams competing at the Waikato qualifier in Cambridge.

After leading the team to a 34-5 win over New Plymouth GHS last year, Ariana Hira-Herangi has gone on to make her debut for New Zealand Women and is one to watch on the road to Rio 2016, where rugby sevens takes its bow as an Olympic sport.

HGHS qualify automatically and will be joined by one other team at the 16-strong girls event in Cambridge.

Two places are also available for boys teams and this year, 24 teams in all will compete in the finals.

One boys and one girls team will qualify from North Harbour where 36 teams are expected at the qualifying event including 15 in the Under-15 grade.

Poverty Bay will for the first time have an automatic qualifier while Nelson College are favourites to win Sunday's Tasman qualifier.

One boys team will join Motueka HS who are already through to the girls event.

The Condor Sevens have given a platform for several future New Zealand sevens players and with the 2016 Olympics now fast approaching, this edition could be one to watch in terms of future talent.