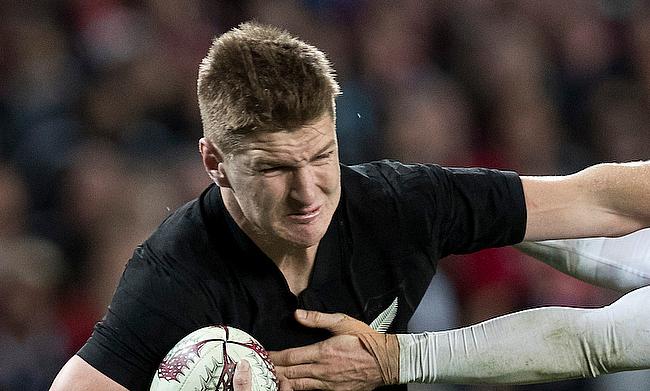 Jordie Barrett was red carded in the 28th minute
©PA

New Zealand continued their dominance over Australia as they registered a 38-21 win in the second round of the Rugby Championship in Perth despite a red card to Jordie Barrett.

The result also meant the All Blacks have won all the three Bledisloe Cup games this year having already claimed the trophy for the 19th consecutive time.

Australia thought they opened their account early as Samu Kerevi offloaded to Marika Koroibete, who raced past the defenders for the opening try but was disallowed as television replays showed Kerevi was at offside position at a ruck in the build-up.

Instead, the All Blacks got their first points with Beauden Barrett kicking a 9th minute penalty goal and the visitors doubled their tally six minutes later after he slotted another three-pointer with this time James Slipper penalised for an infirngement.

The opening try came at the end of the first quarter when Beauden's brother Jordie capitalised on a pass from Brad Weber, who went past Noah Lolesio and Beauden's conversion made it 0-11.

Around the half-hour mark, Australia had a chance to open their account but the kick from Lolesio went wide. A minute later, New Zealand were reduced to 14 players with Jordie sent off as his boot struck Koroibete’s face.

With a second try for Australia ruled out, New Zealand stepped up the ante when David Havili touched down at the back of the maul and Beauden's conversion ensured they went into the break with a 0-18 lead.

Australia finally managed to open their account in the 50th minute when Tate McDermott provided a superb break for Folau Fainga'a to dot down and Lolesio kicked the conversion but their efforts were cancelled out with Will Jordan crossing over for the visitors as the scoreline became 7-23.

The 61st minute saw Havili scoring his second try when he intercepted a pass from Matt Philip to score but Australia responded back five minutes later with a try from Nic White and Reece Hodge improved it making it 14-28.

Any chance of an Australian comeback was put off with Anton Lienert-Brown and George Bridge touching down for the visitors before Tom Banks scored a consolation try for the Wallabies.