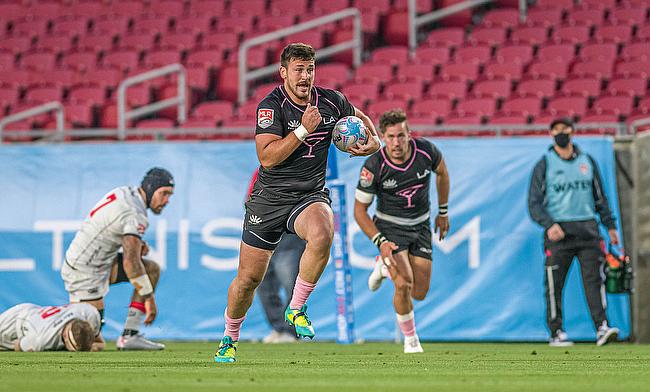 When Sean McNulty picks up the video call, the 25-year-old is tanned and a brilliant ray of sunshine is illuminating his LA apartment.

Brilliant is probably how you would describe the LA Giltinis’ start to the season as well. Seven games into their debut campaign in Major League Rugby (MLR), McNulty and his teammates have won six of their matches.

Several of New York’s players sank to their knees in disbelief as the final whistle blew that afternoon. Relief was an understandable emotion, especially when you look at LA’s hit list so far this season.

Up until the defeat on the East Coast, LA had never failed to score less than 42 points. Starting their time in the big leagues with a 42-27 victory over the New England Free Jacks at the Los Angeles Memorial Coliseum, wins against the Seattle Seawolves, Toronto Arrows, Houston SaberCats, San Diego Legion and Old Glory DC followed.

Now with an encounter against the Utah Warriors coming up this weekend, LA must contend with a feeling they haven't experienced before; bouncing back from defeat.

“It is the old cliché: we were beaten by the better team,” McNulty said when asked about the recent loss. “They came out of the blocks and literally from the get-go to the 80th minute, they just went hard and they were better than us in all facets of the game. 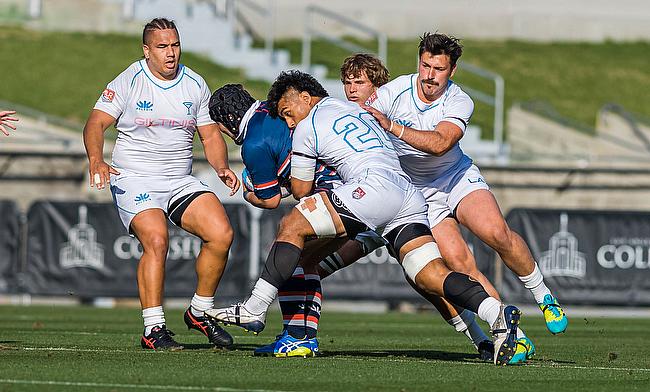 “It sounds an easy thing to say, but it is the truth, and you saw what it meant to them afterwards and I feel like any team that does beat us this season will probably have the same reaction and we are probably going to be viewed as public enemy number one.

“We are the pretty boys from Hollywood, we wear white, play at the Coliseum and all this. I am sure that teams, especially when we go away on the road, will probably look to take scalps off us, but it was a really good learning curve for us.

When it was announced they would be joining MLR, there was plenty of backlash surrounding LA. It is the moniker of ‘Giltinis’ that causes the most conversation, the name essentially being used as a marketing tool for a premium cocktail based on a Martini.

Owned by Adam Gilchrist, the Australian tycoon is looking to launch a drinks empire and this is his second involvement with an MLR franchise after he invested in the Austin Herd, rebranding the team as the Austin Gilgronis last year.

His ownership has seen the likes of Frank Halai, Isaac Ross, Jamie Mackintosh and Kurt Morath move to Texas, but it is California that has piqued the interest of many with some of their recruitment.

The team is coached by Darren Coleman, the Australian arriving in North America weeks after winning the Shute Shield with Gordon and 16 years after coaching the Calgary Mavericks in Canada.

Former Australia international Adam Freier is the man who can be credited with much of the recruitment along with Coleman as the hooker has taken on the mantel of General Manager and he is brought in a wealth of experience in the form of DTH van der Merwe, Bill Meakes, Adam Ashley-Cooper, Dave Dennis and Matt Giteau.

McNulty, in his own right, also brings his substantial qualities to the side. After leaving Leinster in 2018, the hooker returned to America having grown up in the country for a period and he also previously represented New York and New England.

Even his brother, Harry, has come along for the ride with the Giltinis for at least this year, but the Ireland 7s international is currently out injured having broken his hand against Toronto.

With such a diverse group of players representing the team, with individuals coming from Scotland, South Africa, Fiji, Tonga, as well as the USA and Canada, McNulty believes an extended pre-season together is a major reason for LA's early successes.

“We were fit coming into it and then we did pre-season in Maui (Hawaii) so from the get-go, we have been living together full-time, just bonding, training together and all that stuff. We kind of just got the jump on everyone else.

“From Maui, we went to Oxnard (California), which was another training camp. We were there for four weeks, so for the guts of nine weeks we were living together, training together, just working hard, so I think that really stood to us to hit the ground running.”

It is at that point when McNulty’s housemates - Christian Poidevin and Nathan Den Hoedt - shout across the kitchen to remind the hooker that the Dallas Cowboys trained at the same facility in Oxnard...

Already, the Giltinis have made a splash in the LA sporting landscape. As previously mentioned, the team play their home games at the LA Coliseum, one of the city’s most historic venues.

With a capacity of over 77,000, the University of Southern California Trojans play their college football games there and it has hosted numerous NFL sides, as well as baseball's LA Dodgers and two Olympic games, so far. 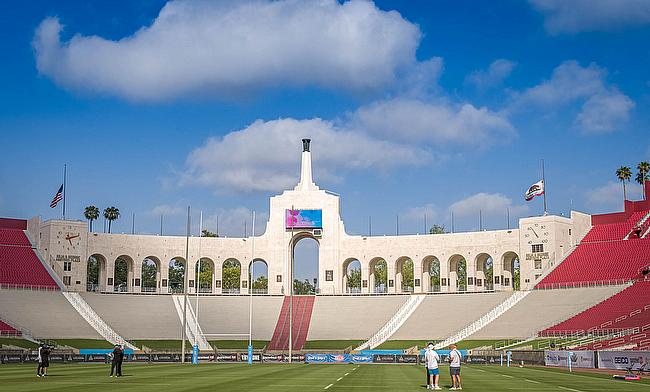 The Giltinis play their home games at the LA Coliseum, but will call the SoFi Stadium home this weekend
©Brian Jackson

It was only at the end of April that fans were finally allowed back into stadia. Several thousand have already made their way through the famous Coliseum arch to see the Giltinis in action, with some well-known faces watching on from the stands.

Jackass’ Steve-O was one of those names, another being Nicole Scherzinger who was accompanying her partner, former Scotland international Thom Evans, to the venue after an invite from former Glasgow Warrior Van Der Merwe. The 42-year-old even went back to the team’s Venice Beach base to celebrate the victory over San Diego and even serenaded the squad... Hollywood.

This weekend will see the team step onto yet another elite stage. Playing at the SoFi Stadium in Inglewood, California, the Giltinis will host the Utah Warriors at the home of the NFL’s LA Chargers and LA Rams.

Hosting the Super Bowl later on this year, as well as fixtures at the 2026 FIFA World Cup, it is an MLR game that will see fans enter the stadium for the first time.

With USC’s graduating classes of 2020 and 2021 flooding to the Coliseum, LA had to find a temporary home and in the SoFi, they have found one. On Tuesday, the Giltinis players visited the venue, with McNulty throwing touchdown passes to former Exeter Chief Dave Dennis on the artificial turf.

“It feels like we are spoilt for choice these days. We went for a look around it yesterday, but it is so impressive. It is so, so cool and I can’t wait to get out there this weekend.”

As American Football, the NFL and the college game are something of a binding force in LA’s season, it felt prudent to ask if there are any Rams or Chargers fans on the Giltinis roster, with McNulty revealing his link to the latter.

“I wouldn’t say that I know Joey Bosa,” he said as a groan is heard from behind the camera. They’ve heard this one before.

“I met Joey Bosa in Dublin before. We had a beer together and we stayed in touch somewhat, so I actually shot him a text to say that I had tickets, but he is back in Florida doing pre-season. He said he will try and get to a game when he is back in the summer. That is probably the only link that I know of.” 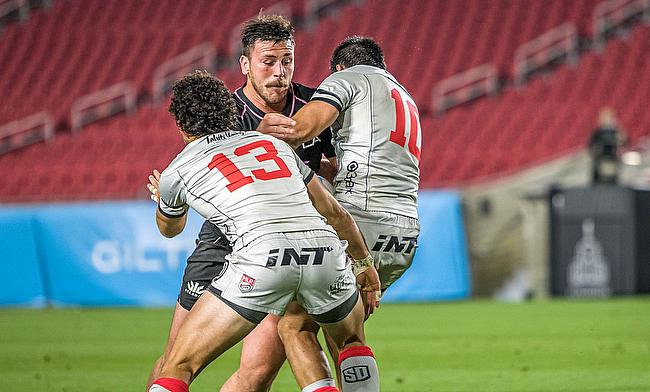 Bosa, as well as the likes of Justin Herbert, Keenan Allen and the Rams’ Aaron Donald, Cooper Kupp and Matthew Stafford are some of the NFL’s star names who call the SoFi home, so it is somewhat fitting that several of the big hitters in the MLR will be doing the same this weekend.

Their opponents, Utah, come into the game as the second-placed side in the West Conference, seven points adrift of their hosts. Scoring a last-minute try through former Giltini, Mika Kruse, last weekend to beat Old Glory DC 34-33 at the Zions Bank Stadium, there could hardly be a better stage for this game to be played on.

But what is the ambition for a team, who up until last weekend, had been a picture of perfection?

“The ambition is to win the league,” McNulty said frankly. "That is absolutely what we need to do and what we plan to do. I’d love to say that the goal is to go 10-0 or 11-0 until the end of the season.

“That is one thing, though. We might have got ahead of ourselves too much. Maybe we need to try and bring it down to go week by week, because as you see, you go away all of a sudden and you are not as well prepared, you are not as switched on and you lose.

“Then, all of a sudden, you are 7-2 instead of 9-0, you know what I mean? So, while the big goal is to win the whole championship, that is something we keep in the back of our minds. To get to that, what we need to do is knock off a win each week, as cliché as it sounds.”