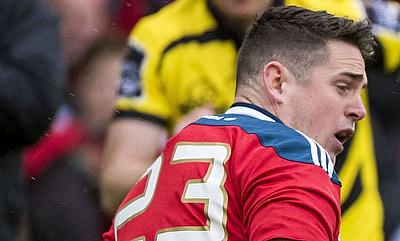 A hard-fought 31-15 win over Scarlets at Thomond Park helped Munster to earn a European Champions Cup spot for the next season after finishing sixth in the ongoing Pro12 tournament.

A discouraging season so far for the Anthony Foley's team ended on a sweet note as they scored five crucial tries to tame a fiery Scarlets side who had already assured their place in the next year's European rugby's top-tier tournament.

Francis Saili (14'), Ronan O'Mahony (60'), CJ Stander (69') and Rory Scannell (26', 79') managed to get across the line for Munster. As fly-half Johnny Holland managed to successfully convert three of those.

Scarlets drew a blank in their tries column despite 81 minutes of play. Fly-half Steve Shingler was the lone points scorer for Welsh side as he successfully kicked five penalties.

Munster nullified Scarlets' four penalties with two converted tries to hold on to a slender two-point lead at the half-time whistle.

The Irish club raised their game in the second-half by scoring three tries while conceding just a penalty to Scarlets.

Things were pretty much under Scarlets' control until the 65th minute with Munster having a fragile four-point lead.

However, skipper Stander scored a crucial try in the 69th minute, giving Munster the much needed edge.

Rory Scannell sealed the proceedings for Munster by scoring an impressive try in the 79th minute, which was followed up by Holland with a successful conversion.

Stander was deservingly awarded the man of the match award as Munster gave a memorable win to the 18,929 fans in Limerick.