Montpellier will be a real test for us - Socino 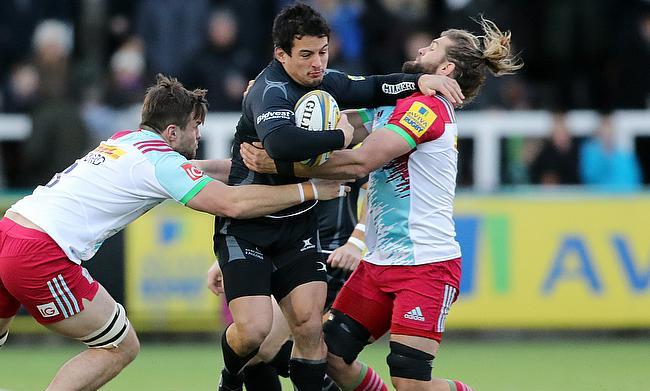 Argentinean international Juan Pablo Socino cannot wait to play against his brother Santiago and Newcastle Falcons later in the year, but for now, all of his focus is on making sure Edinburgh Rugby get off to a good start in the Heineken Champions Cup.

Socino, the 30-year-old centre, joined Richard Cockerill’s men from the Falcons in the summer and played well last Friday in the Guinness PRO14 victory over the Cheetahs at BT Murrayfield.

Edinburgh know that they will have to take their game up a gear as a return to Europe’s top table beckons after a number of years in the Challenge Cup.

This Saturday they are away to Montpellier in Pool Five and then seven days later, they host Toulon in the first block of action before a double header with the Falcons - and his brother – just before Christmas.

“I could be up against my brother in December in the Champions Cup, that is very exciting,” Socino senior told TRU.

“We played against each other in pre-season which was a first and our parents were there for that one so it was an enjoyable moment. It could happen again in December and having played for the Falcons and having my brother there, it is something that would be quite special.

“I don’t want to ask my parents who they will be supporting when those two games come around, but I am the oldest so hopefully me! Seriously though, that is all to come and for now all I am thinking about is the Montpellier game first up as that will be a real test for us.”

In 2011/12, Socino played 20 times for US Dax in France and has fond memories of his time over there.

So, can that spell playing that style of rugby help him as his current charges head to the GGL Stadium to take on Vern Cotter’s men?

“Of course, my time in France can help me prepare for playing against French teams,” Socino said.

“I think French clubs tend to play a bit more loose, a bit less structured to what we’re used to. That can sometimes be seen as a weakness and sometimes as an advantage, so I think we need to bear that in mind when we go into the Montpellier game.

“Early in this week, we have had a look a bit at what Montpellier do, but it has been more about reviewing what we did at the Cheetahs last Friday and starting to look at what we’re going to do to try and take on the big clubs that we now face in Europe.

“I’m massively excited going into these European matches having just made my first home start for the team.

?? Catch up with all the action from Friday night's bonus-point win over @CheetahsRugby.#AlwaysEdinburgh ???? pic.twitter.com/DkMN09XLGz

“I had my first start against Leinster away which was a tough day, but I was pleased to play close to 80 minutes and get the win against the Cheetahs, so I’m really looking forward to the next challenges ahead.”

Before his spell at US Dax, Socino had played for both Rotherham Titans and Nottingham in England.

The man who has four caps for his country then spent six more years with Rotherham and Newcastle before joining up with Cockerill’s men.

He explained: “I spent four seasons at Newcastle. My contract was coming towards the end and I was weighing up my options whether to stay in the Premiership or whether to take on a new challenge.

“That would mean coming to the PRO14, a new city, new country and it was really exciting so I decided on Edinburgh.

“I knew what the team was about and all the changes that had been made with Cockers coming in last summer, things are on a positive path and that was quite important for me.

“The deal went through my agent, but I had a private conversation with Cockers and I talked to my wife and we both decided it was the best option.

“For me it was where he wanted to be as a club and I just wanted to be part of that, putting the team and the city where he thinks it belongs.

“It’s been great joining Edinburgh. Obviously, I spent four years at Newcastle and it’s a different league and I didn’t really know what to expect, but it is a great group of players.

“The boys work really hard and I’ve blended in quite well I think, so I’m really pleased to be where I am at the minute.

“I’m hoping that my performances at the club and playing European rugby can help me get back into the Argentina team going forward, but for now everything is focused on this Montpellier game and then the Toulon match at BT Murrayfield next week.”