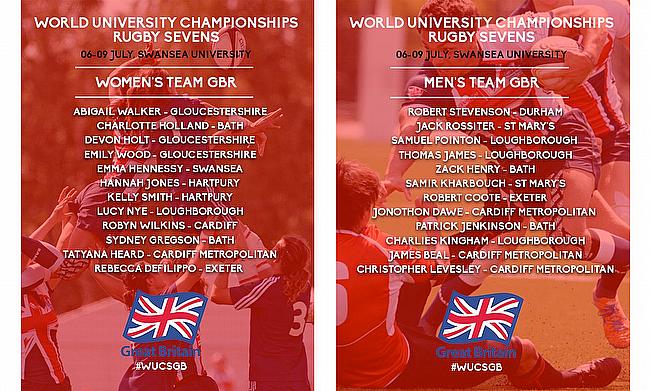 The international competition will welcome 20 rugby sevens teams – 10 male and 10 female – from 16 nations. Two of the competing teams hoping to win gold in Swansea are Great Britain elite Men and Women squads who, following a rigorous selection programme, have been selected by officials from athletes across all home nations, including England, Wales and Scotland.

Both Men’s and Women’s teams include a squad of 12 players representing 10 British higher education institutions, with University of Bath, Loughborough University and Cardiff Metropolitan University providing three representatives each.

Among the selected women are University of Gloucestershire students Emily Wood and Abigail Walker who have both achieved elite sport success in recent years. Emily captained the England U20 side during the 2015/16 season and Abigail played a crucial role in Gloucestershire’s BUCS Rugby Union Championship-winning side in 2015.

The tournament pool draws took place on 2 June and revealed challenging pool opposition for both squads. In the Men’s competition, current world champions Team GBR will share a pool with strong international sides Australia and Italy. GB Women, despite avoiding world champions Canada in their pool, will have to negotiate challenging fixtures against New Zealand and France to progress to the competition’s finals.

Hoping to guide the men’s to international glory is Head Coach, James Farndon, who has been involved in student sevens for a number of years. During which time he undertook the role of Head Coach at both the 2010 and 2014 World University Championships.

"It’s always very exciting to bring together the best student players across the home nations for these sevens championships, and we are very pleased with the wider squad we have selected. The emphasis over the next month will be to develop a strong team work ethic, a collective understanding of how we want to play, each other's strengths on the field and of course individual fitness levels.

“Bigger picture, there are some very strong nations attending the Championships and we will be very focused on winning. The players involved are presented with a significant opportunity to test themselves in an international competition which shouldn't be underestimated in terms of their development," says James.