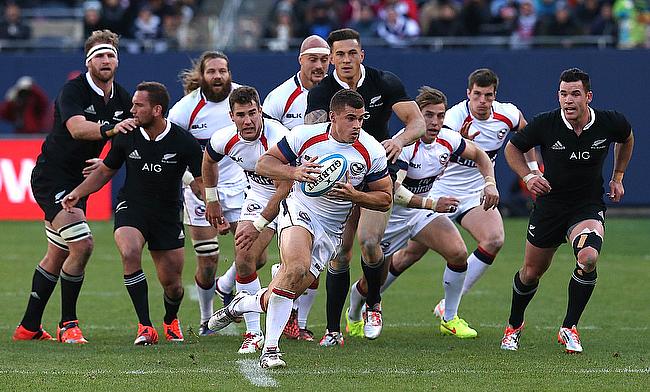 USA are ranked bottom of Pool B
©USA Rugby

USA 7s head coach Michael Friday feels that it is achievable for America’s XV a-side team to qualify from Pool B at this year’s World Cup if they are consistent.

The Eagles will be battling it out for second spot against Scotland, Samoa and Japan in the group with South Africa favourites to top the pool.

America round of their World Cup warm-up matches when they play Harlequins in Philadelphia on Sunday 30th August before facing Australia the week after.

USA’s Eagles are coached by Mike Tolkin, Friday believes Tolkin and his current squad are capable of progressing to the last eight of the competition this autumn.

“I think South Africa are the favourites, but in terms of the rest of the teams, it’s quite an interesting group,” Friday told Talking Rugby Union.

“In theory Scotland and Samoa are probably the favourites on paper, but as we saw the other week, USA v Samoa was a one score game and Scotland are going to have to insure they continue to improve if they are going to get out of that group.

“I think if the USA get a consistency in their game, clarity at the set piece and solve their goal kicking problems then I think they can compete with the other nations for the second place.

“It will be fiercely competitive, but achievable. What you need going into a World Cup group is that you need to see the opportunity that you can progress and that is there for them.”

USA open their campaign against Japan on 11 October and unlike other teams at the World Cup, they are still a developing rugby nation meaning they do not have a huge amount of strength in depth.

Argentina are another team that do have young players who arguably have their sights on the next World Cup in Japan.

However, even though this USA team is youthful and does not have huge tournament experience, Friday believes they will be fully focused on this year’s competition rather than building for 2019.

He added:  “I think you have to plan to put your best foot forward for this World Cup and I think they have got some younger players because there isn’t a depth in the America playing talent.

“I think people need to appreciate that even though they have a big population, the rugby population is still very, very small and we have to recognise that we are still a growing sport.

“With things like the Olympics and the Rugby World 7s Cup coming to America in a couple of years’ time then you will see the slow awakening of a big rugby nation.”