Mike Brown: "I absolutely love playing for England, it means everything to me" 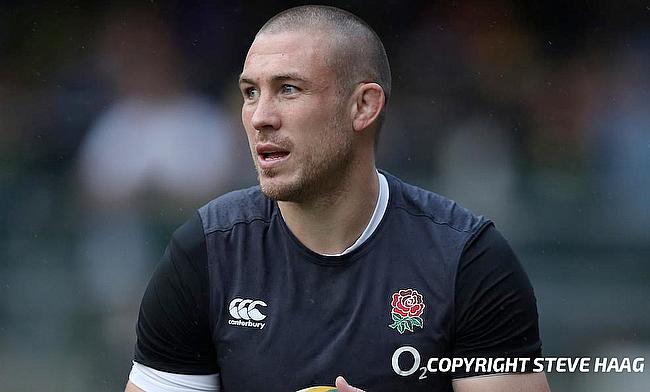 Capped 72 times by his country, the Harlequins stalwart produced another solid season at the Stoop but his efforts on the domestic front, combined with his international experience, were overlooked at the beginning of the month.

However, following the 33-year-old’s absence from Eddie Jones’ original plans, Brown is back in the fold with just under two weeks until England announce their 31-man World Cup squad.

“You have that doubt at the back of your mind, but Eddie said just be ready so I went straight back to ruins and was welcomed with a Bronco fitness test!” said Brown. “That was pretty savage then I made sure I was ready. I was over the moon to get the chance to come back in and continue.”

Brown never assumed or accepted his international career was stagnating. Following on from the disastrous 2015 World Cup campaign, he was a regular under Jones but his appearances for England did come to a halt after their tour of South Africa last summer.

Mike Brown has been left out of the England squad for Saturday's match with South Africa at Twickenham.

Brown was dropped for the Autumn internationals and didn’t feature for England during the Six Nations campaign, despite being named in the squad. However, he has always expressed his desire to ‘never give up’ fighting for an England jersey and with the World Cup in Japan edging ever closer, Brown has been given another opportunity to prove his worth.

“Obviously, you want to be named in all the squads that Eddie announces,” Brown added. “We are all competitive animals so we’d be disappointed and we’d be lying if we didn’t say we were disappointed if we weren’t named.

“But I have been back in for the last three weeks, training as hard as possible to offer competition for places and also to make sure the team, whoever Eddie picks, is in the best place possible.

“I absolutely love playing for England, it means everything to me. That’s why I work so hard, off the field and on the field so it is great to be here and I am trying to show what I am about and show what I can bring to the team.”

Brown is currently away with the squad in Treviso as England continue to increase their preparations ahead of their World Cup warm-up matches against Wales, Ireland and Italy.

Assistant coach John Mitchell revealed how tough the humidity has been for the players during their training camp in Italy with prop Dan Cole also expressing ‘there is no place to hide’ as the intensity rises. For Brown, this is the second pre-World Cup squad he has been involved with and he explained just how difficult the weather conditions have been.

“Yeah, it’s incredibly tough,” he said. “It’s about 80 per cent humidity today so as soon as you step outside, everyone starts sweating. You are absolutely dripping with sweat and that makes ball-handling very tough. And also, for your core temperature, it is hard to keep that low, because you are sweating all the time and it just sits on your skin and then heats up even more so you can’t get your body temperature down,

“The hardest thing is getting your core temperature down so we have things in place for that - guys coming on and spraying you with cold water. Constantly trying to wipe the sweat off you so your skin gets the chance to cool down and things like that.”

Before last year’s Six Nations, Jones declared he wanted England to be the “fittest team on the planet” by the time the World Cup came around and the head coach is certainly putting his side through their paces in Italy. Their warm weather training has also seen players lose weight everyday due to the increased humidity, which they will encounter in Japan, and Brown revealed what impact the sessions are having on him.

He added: “We weigh ourselves at the start of sessions and then after so you know how much weight you have lost. The nutrition guys make sure you get the right things after training to put that weight on. For example, our first really hard session here last Wednesday, I lost 3kg of weight so it's about getting the fluids back on and eating more after a session.

“In England - I would probably barely lose any weight from a normal session in normal conditions. After a Test match, I would probably lose a maximum of 1kg and that's playing at the highest level under massive fatigue. So that puts it into perspective of the weight loss that you can get over here.”

Whilst fitness is a main target for England during this training camp, team-bonding is also seen as a key aspect, especially with a major tournament on the horizon.

The journey to Japan continues as Eddie puts the squad through their paces at a training camp in Treviso ?? #WearTheRose ?? @O2Sports pic.twitter.com/EM4dE99LKE

Ahead of the Six Nations, Henry Slade said a ‘darts night’ along with a ‘couple of drinks’ were factors behind England’s impressive victory over Ireland in Dublin and that closeness within the group is something which has continued ahead of the World Cup.

“We have had some good times off the field as well together, making sure we bond and get closer as a team, which is also important going into a World Cup, added Brown. On the weekend we had a boat trip to an island just off Venice and had some food and enjoyed each other's company on the boat and had a few drinks.

“We have had positional dinners, team drinks - staff and players and just doing little things like that that builds bonds and memories talking to people you don't normally get to talk to. You learn a lot about people you don't spend every day with.

For Brown, he will hope to be part of further team-bonding sessions over in Japan this autumn. With England’s most capped full-back now seemingly competing with Anthony Watson and the uncapped Ruaridh McConnochie for the last spot in the back three, Brown is determined to not give up on his World Cup ambition.