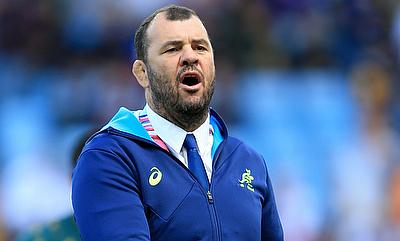 Australian head coach Michael Cheika insists the Wallabies are still underdogs for their make-or-break World Cup encounter with England at Twickenham despite the host nation’s demoralizing and shock defeat to Wales last Saturday.

With a defeat to Australia meaning England would effectively be eliminated from their own hosted competition, England boss Stuart Lancaster's entire tenure is on the line at Twickenham on Saturday night.

Should England fail to reach the quarter-finals in this year’s competition, they would go down in the history books as the worst-performing hosts of a World Cup since the tournament began in 1987.

Despite twice leading by 10 points against Warren Gatland's side on Saturday, England fell 28-25 to Wales on home soil, with a poorly-executed 79th minute decision to kick for the corner and attempt a rolling maul (which Wales duly repelled) instead of opting for the chance to tie the game with a penalty, looming large in English consciousness in the days since. Saturday’s result means England now have to beat Australia to give themselves any semblance of a chance of keeping their tournament hopes alive.

"You'd have to think we're still underdogs, playing in their backyard," said Wallabies head coach Cheika, speaking after Wycliff Palu and Will Skelton were ruled out of the tournament through injury.

"I was talking to some of the lads the other day - when the thunder starts at Twickenham, you've got to be ready for it.

"They've been very successful at that ground, so it's just about being ready to be yourself and play our way, and play the best we can and let the cards fall as they may.

"We've been in similar positions, losing one week and needing to win the next.

"I'm sure they'll believe strongly they'll beat us, and I'm sure that's all that counts."

Flanker Palu's international career with the Wallabies looks set to be over after 57 caps owing to a tournament-ending hamstring injury, while lock Skelton has suffered a torn pectoral that requires surgery.

Australia have taken the unorthodox approach of replacing back-rower Palu with a hooker, James Hanson, perhaps using Palu’s injury as an opportunity to rectify the initial decision to carry only two hookers in their 31-man squad, a decision that came under much scrutiny.

As the pressure mounts steadily on England boss Lancaster, Cheika has attempted to downplay the magnitude of Saturday's tie - but was obviously happy to crank up the tension as a cheeky by-product.

"I don't know if it would damage the tournament if England are knocked out early, that's not my domain," said Cheika.

"I'm just the simple old coach of the Australian team.

"It's been a great tournament so far, though, it shows just how popular rugby is in England.

"I don't think you hide from the situation and pretend something's not happening.

"We always knew we were playing England in this competition and with the place we're coming from after the last spring tour, every game's like a World Cup final.”

"We're coming from a fair way back, we've got a relatively inexperienced coaching staff at international level - we're all pretty much babies at it, not in age obviously, but in experience," said Cheika.

"And so we're just doing our best as we go along.

"They've (England) had a long time together, and planning this.

"So I'm really happy with the way we've approached it but I'm still looking for big improvements, we've still got more improvement in us, mentally, tactically and physically in our game."