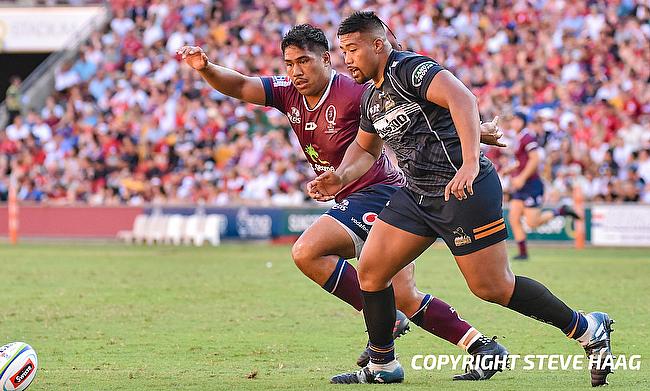 Folau Fainga'a was one of Brumbies' try-scorer
©Steve Haag

Will Harrison missed the decisive conversion in the end as Brumbies edged out Waratahs 24-22 in the latest round of Super Rugby AU at Sydney Crickey Ground on Friday.

This is Brumbies' fifth win from six games as they reclaimed the position at the top while Waratahs are languishing at the bottom after losing all their six matches.

It took Brumbies just four minutes to score the opening try as Tom Banks went on to beat Alex Newsome, Izaia Perese, Jack Maddocks, and James Ramm to go over. Noah Lolesio missed the conversion as the visitors had a 0-5 lead.

Waratahs reduced the arrears to seven points after Harrison kicked a three-pointer in the 19th minute and four minutes later after Jake Gordon came close but was stopped near the line. His pass was recycled and Harry Johnson-Holmes made most of it to touchdown and Harrison improved it as the scores were levelled 10-10.

Around the half-hour mark, Brumbies seized the lead once again with a terrific solo effort from Andy Muirhead and in the 35th minute Folau Fainga'a dived at the back of a rolling maul for their fourth try. Lolesio kicked both the conversions as Brumbies went into the break with a 10-24 lead.

The start of the second half saw Brumbies reduced to 14-men temporarily with Tom Cusack sin-binned for infringing at the ruck but Waratahs failed to capitalise on the numerical advantage. Harrison with a converted try in the 66th minute kept the home side in the hunt and their chances took a further boost as Brumbies lost Rory Scott to sin-bin in the 75th minute.

Just as Brumbies looked to have sealed the game, Waratahs gave them a scare as they opted for a scrum from five metres and eventually James Ramm went over that brought the difference down to two points but Harrison's conversion drifted wide leaving the hosts get away with a two-point win.