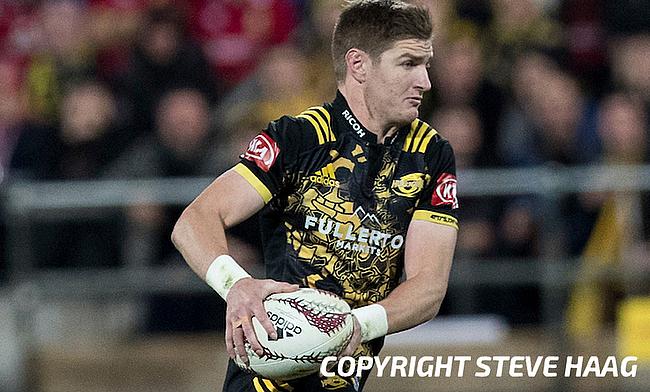 Jordie Barrett scored all 30 points for Hurricanes as they defeated Highlanders 30-19 in the fifth round of Super Rugby Aotearoa on Friday.

This is the first win for Hurricanes in the season as they move to the third place in the table with five points while Highlanders are at fourth after losing their third match.

Barrett was outstanding from the outset as he kicked a fifth minute penalty goal to get the visitors off the mark and few minutes later fly-half Orbyn Leger made a perfect pass to send the fullback over the line. He also followed it with the conversion as the Canes raced to a 0-10 lead.

Hurricanes were reduced to 14-men temporarily when Tyrel Lomax was sin-binned in the 24th minute and as Highlanders looked threatening, Dane Coles grabbed the ball at breakdown to provide some relief for the visitors.

Nevertheless, Highlanders eventually opened their account with Bryn Evans slipping over at the back of a maul and Josh Ioane improved to make the scoreline 7-10.

As Hurricanes returned to full strength, they dominated the closing stages of opening half with Salesi Rayasi breaching the defence of Highlanders and offloaded to Barrett, who completed his second converted try as the teams went into the break with a 7-17 scoreline.

There was no respite whatsoever for the Highlanders as handling error from Hunt gave the Hurricanes a midfield scrum and as Ngani Laumapi sped through to set up Rayasi, who sent another pass Barrett as he sealed his third try followed by the extras as well taking the visitor's lead to 7-24.

Barrett with another three-pointer with over 50m distance took Hurricanes' tally to 30 points before Highlanders broke the shackles when Aaron Smith set up Connor Garden-Bachop dive in the corner. Highlanders continued to press on the attack and were rewarded with their third try coming from Thomas Umaga-Jensen before Barrett capped off a fantastic game with another three-pointer in the final minute as Hurricanes sealed a 11-point victory.