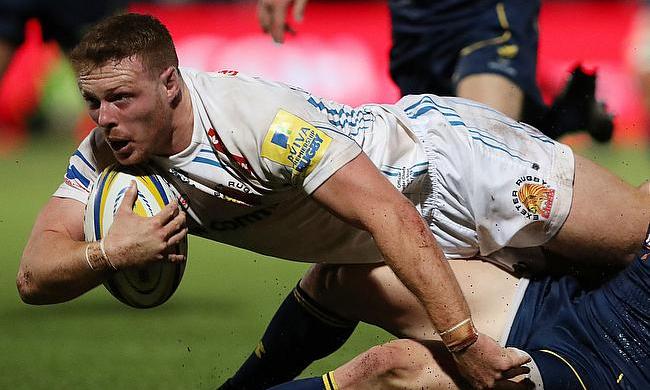 Exeter Chiefs managed to overcome a spirited fightback from 14-man Leicester Tigers as they sealed a 47-31 win in the 14th round of the Gallagher Premiership at Sandy Park.

The Chiefs now have narrowed down the gap over top place Bristol Bears to two points though they have played an additional game while Leicester are at eighth place.

Exeter kicked a penalty to the corner set-up a five-metre line-out, which Innard threw long to Ollie Devoto and after consistent pressure Harry Williams dived over in the 12th minute and Joe Simmonds kicked the conversion to make it 7-0.

Leicester were down to 14-men inside the 15 minutes as Kobus Van Wyk was sent-off following a high tackle on Jack Maunder and the home side doubled their tally in the 22nd minute with Tom O'Flaherty dotting down after Dave Ewers and Sam Simmonds laid the foundation.

Infringements continued to hamper the Tigers as the 29th minute saw Dan Kelly sin-binned for a professional foul leaving the home side a two-player advantage which saw them capitalise immediately with Dave Ewers and Harvey Skinner diving from close range to make the scoreline 28-0.

The response for the visitors came in the 36th minute when Tomas Lavanini dived over and Jack Van Poortvliet followed the suit at the stroke of half-time as the opening half ended with a 28-12 scoreline.

Exeter got off the block quickly in the second half as a clever kick from Joe sent Sam Simmonds over for their fifth try but Leicester were relentless despite down on numbers as Matt Scott crossed the whitewash in the 48th minute making it 35-19. Exeter once again seized the momentum with Ewers sending a perfect pass to Olly Woodburn, who dived in the corner making it 40-19.

The Tigers were still in the hunt after Charlie Clare and Hanro Liebenberg scored to bring the gap down to nine points and their opportunity boosted further when Exeter lost Facundo Cordero to sin-bin for a deliberate knock on. However, Rob Baxter's men held their defence tight before they got their seventh try when Jacques Vermeulen went to crash over in the right corner to complete a 47-31 win.